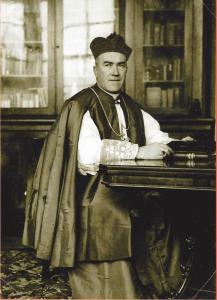 Patrick Winters was born at Ramore, Killimor, Co. Galway, in the Diocese of Clonfert, on 8th October 1908, one of a family of four, two boys and two girls. His parents were Patrick and Kathleen Winters.

He received his early education at the local National School and afterwards attended St. Joseph’s College, Garbally Park, Ballinasloe. On leaving school he worked for four years and then entered the Pallottine College in Thurles on 28th October 1931. There he completed his Spiritual Year (the reserved year of the two-year novitiate) from 8th September 1932 to 8th September 1933. He made his First Profession as a Pallottine on 8th September 1934, in the Old Pallottine College (“Jerusalem”). Meanwhile he studied philosophy at St. Patrick’s College, Thurles, from 1933 to 1935.
On being sent to Rome he lived at the presbytery attached to the Basilica of San Silvestro in Capite and studied Theology at the Gregorian University between 1935 and 1939. He was ordained priest on 3rd July 1938 and obtained his Licentiate in Sacred Theology in 1939. He left Rome on 11th November 1939, and after Christmas he was assigned to work in St. Peter’s Italian Church, Clerkenwell, London. From there he went to do supply work at the Church of St. Mary of the Seven Dolours and St. Philip Benizi, Fordingbridge, Hampshire, in the Diocese of Portsmouth, on 17th March 1940.

Fr. Winters volunteered for missionary work in Tanganyika (now known as Tanzania). In Mary 1940 he and two companions boarded the ship Llandaff Castle and set sail. From Las Palmas in the Canary Islands they sailed on to   Freetown in Sierra Leone. Having arrived at Mombasa, Kenya, in June 1940 the long and dangerous sea journey had come to an end. Fr. Winters travelled by train to the Tanganyika-Kenyan border. And so began his missionary work. First he had to learn the language, Kiswahili. He then started his programme of evangelising, building churches, schools, dispensaries, hospitals and seminaries. He visited neglected areas, travelling miles over tracks without gravel or stones, initially by lorry and later by motorcycle which he repaired himself when necessary. Eventually he acquired a motor car. In a letter he said “I like the natives. They are real harmless and simple, especially the children”; and again he wrote “it is a marvellous life out here”. He was a hard-working, dedicated and conscientious man who expected the same level of commitment from confreres and fellow-workers. He kept in constant touch with his Pallottine Superiors, many bishops and other religious congregations who often came to his aid by supplying personnel or finance.

Monsignor Patrick Winters was consecrated a bishop at the Cathedral of the Assumption, Thurles, on 4th May 1952.

Bishop Winters is welcomed home to his native parish, Killimor, after his consecration.

Between 1948 and 1958, under Bishop Winters’ leadership, approximately fifty primary schools, three middle schools, and two hospitals were built and ten new mission stations were opened in the diocese.  Both hospitals were under the direction of the Medical Missionaries of Mary. In 1965, Bishop Winters was taking flying lessons from time to time and was in the process of building an airstrip in his diocese.

Having decided to retire from Mbulu Diocese, Bishop Winters settled into his new home in Ballybane, Galway. He lived there for some years and when in failing health he went to live in Thurles in 1992. 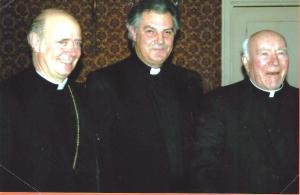 This picture was taken in the Dining Room of the Pallottine College, Thurles, Co. Tipperary between 1992 and 1994.