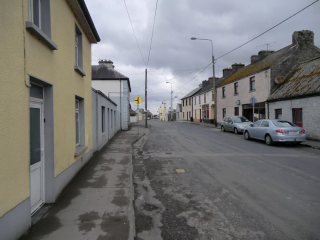 After Trinity Church, the first exit to the right, the L4308, leads to the neighbouring parishes of Quansboro, Eyrecourt and Laurencetown. An exit to the left in the centre of the village, the L4315, can be used as one way to go to Tynagh, Gorthanumera and Abbey/Duniry. This exit also leads up to Mass Hill or Cnoc an Aifrinn in Treananearla, where, during the Penal Laws in the 17th century, Catholics in the parish of Killimor-Bologue attended Mass. The Diocesan Archives record the presence of St. Brigid’s Well in Treananearla. The water of this well had curative properties for the eyes and for sterility, and was supposed to prevent the onset of sickness.

Described as a corn mill

Ballycahill Mill is also located up this road. The Valuation House Books, dating from the period 1832 – 1840, show that Bryan McDermott, miller, had a corn and tuck mill at Ballycahill. The County Council Rateable Valuation books, covering the period 1895 to 1915, named James Nolan as occupier of the mill, which is described as a corn mill. Nolan was succeeded by Francis W. Lynch who, in turn, was succeeded by Michael Dillon in 1915. The mill is now owned by the D’Arcy family who have converted it to run as a hydro-electric station supplying the family home, farm and a workshop with power.