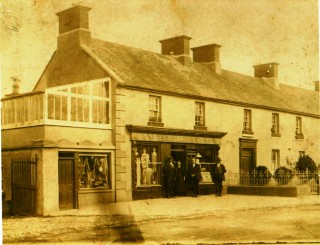 We now come to what was known as Larkin’s/P.C. Curley’s. Patrick Larkin was born to Patrick and Celia on that premises about 1866. He immersed himself in the game of hurling and was instrumental in writing the first codified Rules of hurling, which became widely known as “The Killimor Rules”. P.C. Curley, from Kiltormer, married Bridget Larkin, sister to Patrick, and the premises was then called P.C. Curley’s. The building was once a hotel of note, with commercial travellers, cattle dealers and others lodging there. It also housed a fine drapery shop, millinery, grocery and bar.