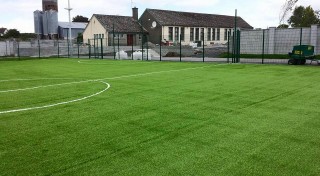 We retrace our steps and head back up the village. Opposite the L4322 exit is the site of the “old” old school, a two-storey building which was officially opened, though unfinished, on January 7th, 1861. The school was demolished, to make way for a more modern one, in 1963. This second school is now the old school as it has been superseded by a state-of -the-art new school on a new site. The surrounding grounds of the 1963 school have been developed and the sign inside the entrance to the spacious parking area reads: Killimor Recreation & Fitness Astro Turf. Plans are in the pipe-line for further development of the remaining ground and the unoccupied building.