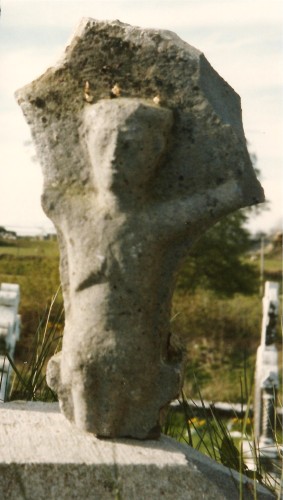 The site of a lost Medieval Cross is located in the fields east of the Medieval Parish Church. Nothing survives of the Medieval Cross either; local folk tradition maintains that it was taken away on a cart by a group of men from Lorrha, who regarded it as their right to do so, due to the belief that St. Íomar came from Lorrha. However, despite this apocryphal story, at least part of the cross survived on the site up to the latter part of the twentieth century. The surviving fragment, photographed by Jim Higgins in 1986, has since disappeared from the site.

Bore a full figure of the Crucified Christ

It was late medieval in date. The cross, which was carved from limestone, bore a full figure of the Crucified Christ carved in high relief. The Killimor Cross is one of a number of graveyard and wayside crosses found in Clonfert Diocese. Higgins argues that the Killimor Cross was a close parallel to the Market Cross in situ in the Market Square at Athenry. It is in the context of a market cross that we should also view the Killimor Cross, as the field in which it was located is indicated on the various editions of the Ordnance Survey map as a Fair Green. It seems implicit from this evidence that a fair and market took place