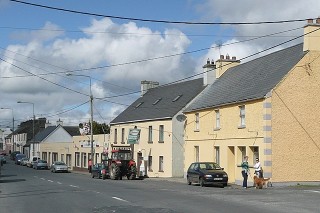 The initial settlement, that later evolved as Killimor, developed at the intersection of two major topographical features – the Kilcrow river and the esker network, both of which were important routes in earlier times.

The early history of Killimor is difficult to ascertain, as very few references exist. What is known, however, is that a religious foundation that sprang up there is reputed to have been established by St. Iomar. The name Cill-Íomair means the Church of Imor.

Killimor is also spelled with the letter “e” at the end, and is also known as Killimor-Bologue. Some experts think that the word Bologue means a loaf or a yearling heifer. Again it is said that the word Bologue was post fixed to Killimor to distinguish it from Killimordaly, a parish lying in the barony of Kilconnell near Athenry.

Killimor can boast of a wealth of archaeological sites and monuments in the various townlands in the parish such as forts, children’s burial grounds, corn mills, souterrains, stepping stones, bullaun stones, eel weirs, limekilns, and a tunnel which is situated in the townland of Ahanduff. A full listing may be found on archaeology.ie and on the Ordnance Survey Map.

With the passage of time and changing circumstances, the face of the whole parish has altered. Old homesteads have been abandoned or demolished and many new houses have been erected. Roads are tarred to accommodate the volume of traffic passing through and to allow easy access to the various townlands. The population has dwindled, nevertheless, Killimor still has a very vibrant community. We have a modern primary school on the outskirts of the village, on the Loughrea road, to provide for the educational needs of the children. Our hurling pitch is on the Kiltormer/Ballinasloe road, providing a venue for matches and the training of teams. A Nursing Home stands in the townland of Magheramore to cater for senior citizens in old age!

The village of Killimor has changed dramatically over the years. In 1894 the commercial life of the town was recorded in Slater’s Directory which named the people and their various trades. These trades included dress makers and tailors, grocers, victuallers and bakers, boot and shoe makers, weavers, carpenters, blacksmiths and saddlers, delph dealers, general merchants, a postmaster and a miller. One sixty nine year old person’s status was given as “washwoman” while another occupation was recorded as “lodging/housekeeper”. The 1901 and 1911 Census Returns provide a wealth of information on family names and their various circumstances of each homestead. Many of the family names recorded then are no longer in the area. Some, thankfully, are still to the good. They include Byrnes/Byrne, Duffy, Kirwan, Matthews and O’Meara.

Today in the village we have a Church, a School, a Garage, Supermarkets, Restaurants, Public Houses, a Post Office, Hair Dressing Salons, a Beauty Salon, a Health Clinic, a Pharmacy, a Community Centre, a Culture and Heritage Centre, a Library, a Fitness and Recreation Centre, and a Garda Barracks.