A Shopkeeper in Killimor 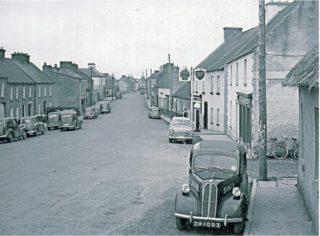 Few people in the present Killimor community will have heard of Griffin’s shop.

This particular business was owned and run by Mrs. Julia Griffin in the building which now displays the name J. CUNNIFFE over the door.  Julia, whose maiden name was Keary, was from Gragagowan, Gortanumera, and she married Owen Griffin from Coolagh in the parish of Mullagh.  Local sources say that the Griffin family had a shop in Coolagh.  This particular place is now the property of Tom Shiel and family.  According to the 1901 census she was a married shopkeeper.  The 1911 census named her as head of the family and as owning a public-house.  Also present in the house on the night of the census were her niece Winifed Griffin, her nephew Michael Griffin and two servants, John Tuohy aged twenty five years, and seventeen year old Mary Kennedy.

Two account books (ledgers) from Mrs. Griffin’s business still exist.  The first ledger dates from 1903 to 1920, and the second one covers the years 1911 to 1924.  The accounts in both ledgers are written in pen and ink or indelible pencil.  Some pages are missing while others are tattered and not very legible.  Nevertheless, they paint a picture of a varied and thriving enterprise.  People’s accounts show that she stocked a wide range of goods.  These included the staple foods, animal feeds, household necessities, drapery, footwear, hardware and religious objects such as scapulars, holy-water fonts and holy-water stands.  Mrs. Griffin sold smelling-salts to revive anyone who suffered an attack of the “vapours!”   An unusual sale in March 1904 was that of a herring vessel.  Sales of tins of condensed milk were very brisk during the months preceding the birth of calves when cows were “dry” and did not yield any milk for household use.  Meat was regularly noted in accounts but it probably meant bacon.  Ham also figured, as did the sale of “3 lbs. smoked bacon” in January 1912.  In December 1912, a patron bought currants, peel, nutmeg, cinnamon, ginger, flour, butter,  whiskey, porter and claret in preparation for the Christmas baking.  An entry for July 10th 1904, marked “the cutting of the turf” when the meitheal, who gathered to give a helping-hand, required some sustenance.  Items purchased for this big undertaking were: a half barrel of porter, one stone of meat, tea and sugar, one pound of soda, one bottle of raspberry and a half dozen soda.

Judging by the accounts Julia Griffin did a steady trade in the public-house area of her business.  In fact, many of the accounts held by customers dealt solely with the purchase of alcohol, for consumption either on or off the premises.  She charged 7d. for a pint of porter, 9d. for a bottle of ale, a half glass of wine for 6d. and a glass of rum for 1s.8d.  Drinks for special occasions, such as house-weddings, wakes, funerals, threshing the corn or saving the hay, were bought in larger quantities.  Gallons of porter, pints of whisky and bottles of wine were the order of the day, supplemented by an ample supply of tobacco, cigarettes and matches.

Mrs. Griffin supplied a lot of goods on credit and customers paid off part of their accounts on a fairly regular basis, and always by cash.  As happened in the other businesses in the town, there was usually a small “balance due,” this balance was “brought forward” and incorporated in the new account.  In order to reduce a debt in August 1905, a customer, who owed over £4, paid off £1 by “painting one car”, presumably an ass’s or a pony’s cart.  Like her counterparts in business, she too lent money to customers in financial difficulties.  Loose slips of paper, found in the ledgers, indicate that Julia Griffin held an account with one of her own customers, Martin Connaire.  Martin was a local blacksmith who shod trap and dray wheels, repaired the trap, made wheel rims and shoes for the ass and pony, and even painted eave-chute holdfasts for her.

As well as keeping customers’ accounts in the books, Mrs. Griffin recorded items of interesting information.  Between the years 1908 and 1911 she paid a twice-yearly rent of £7.6s.3d. to Fr. Calnan (sic) indicating that, as well as owning land, she must have rented some.  She notes the payment of money to Mr. Taylor (an auctioneer from Portumna) by Mike Griffin (related to Julia but the precise relationship is not known) of Coolagh and Killimore for “the land of James Pelley”.  She took a particular interest in her livestock, documenting when cows were serviced, calves born, their gender and when they were moved out to grass.

Payment “for the League”

A significant entry on 21st May 1908 shows the payment of 5s.0d. “for the League”.  A further payment of 5s.0d. on 10th October 1908 was “cash for the meeting”.  These donations suggest support for the Killimore branch of the United Irish League, an organisation deeply involved in the land issues pertaining at that time.

A Cure for Pains

Found among all the snippets of news, and dated July 1909, was a list of ingredients, which when combined, were supposed to cure pains.  The list read: 1 oz. Chloroform, 1 oz. Belladonna, 1 oz. Aconite and ½ pint best whiskey.

Mrs. Julia Griffin died on 19th February 1926, at eighty five years of age, and is buried in Killimor cemetery.  After her demise her nephew John Cunniffe took over and ran the business, mainly as a public-house, for many years.