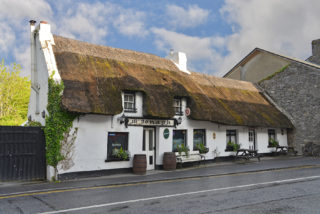 Going northwards along Main Street, on the right-hand side was Oranmore’s last surviving forge, out of a known three. The blacksmith was Frank Forde. Across the street is another pub; Mcdonagh’s Thatch bar, built in 1709. Until 1965, Guinness was bottled on the premises and it was the only newsagent’s in the village until the late 1960s.

The two buildings adjacent to The Thatch were home to O’Connor & Son bakery and later to a Co-Op. They were taken over by Michael Greaney who became a general merchant selling hardware and ironmongery, fertiliser and coal. He was an egg exporter who ran a travelling shop to sell groceries around the parish and to collect the eggs, on an exchange basis. He was also a tea merchant who packed his own brand of tea and owned Greaney’s Bar, now The Old Brewery.