Biodiversity awareness and engagement through the conservation of Barn Owls

This is a Galway County Council, Creative Ireland and BirdWatch Ireland initiative 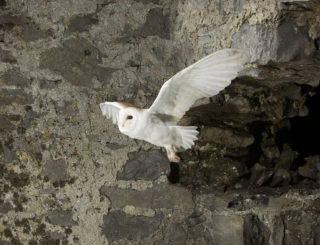 The Barn Owl holds a unique and mysterious allure for Irish people. Their dark, soul-piercing eyes and bloodcurdling screech are almost other-worldly. To glimpse its ghostly form, floating silently over their hunting grounds in the dead of night is one of the most magical natural spectacles in the Irish countryside. Although such sightings are increasingly rare in the Irish countryside, the Barn Owl nevertheless remains one of our best known birds and have long always been tied to our myth and folklore, such as the legend of the Banshee, for which the eerie territorial screech of the Barn Owl is largely responsible.

Barn Owls also gained the reputation as the ‘farmers friend’ in generations past for the essential role they played in keeping rodent numbers in check. Although Barn Owls have long been replaced by chemicals as the most popular means of rodent control, the goodwill towards them within the
farming community, as well as the general public, remains as strong today.

Sadly, like many other farmland birds in Ireland, the changing agricultural landscape has resulted in dwindling resources and suitable habitats available to the Barn Owl. The intensification of
agriculture, particularly the reduction of prey-rich foraging habitat, the increased use of anticoagulant rodenticides and the increase in major road networks are all likely to have been influential in bringing about the significant decline observed in recent decades. The Bird Atlas (2007–2011) revealed a breeding range decline of 39% over the past 40 years, and as a result of these declines the Barn Owl is categorised as a Red-listed Bird of Conservation Concern in Ireland highlighting it as a conservation priority.

In April 2020, Galway County Council and Creative Ireland have teamed up with BirdWatch Ireland to launch a new initiative to learn more about Barn Owls in County Galway, to raise awareness of the species and the conservation pressures that affects their population and to engage with local communities through conservation and education initiatives focused on Barn Owls in the county. As an apex predator and a sentinel species for the health of our countryside, conservation efforts directed can deliver wider ecosystem benefits, and this is the objective of the project. We will produce bilingual resources and worksheets which will use Barn Owls to explore the local environment and a range of environmental topics such as food chains, adaptations, predator and prey relationships, habitats, poisons, pollution and climate change and to promote active learning and engagement with the natural world. This project will provide an outlet for citizen science to assess the status of Barn Owls in the county and for community-led conservation initiatives to deliver benefits to Barn Owls and biodiversity. We will produce a series of videos to document this work and to showcase the secret lives of Barn Owls in County Galway and bring this magical bird into the homes of people throughout the county and with it encourage active engagement in conservation and local biodiversity.

For more information on Barn Owls check out the Barn Owl booklet and videos on Barn Owl ecology and research.