The Slí Bhéara Breifne / Beara Breifne Way (Hymany Way) is an 80-kilometre trail in County Galway, Ireland. It begins in Portumna and ends in Ballygar. It is typically completed in four days.

“Starting in Portumna, the trail follows the banks of the River Shannon before turning inland at the townland of Friarsland, near Eyrecourt, to reach Clonfert. From Clonfert, it crosses bogland to the townland of Cloonascragh. On the final approach to Aughrim, it passes the site of the Battle of Aughrim.” 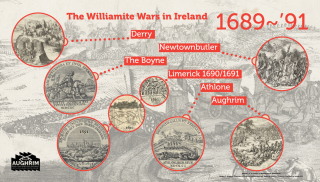 Battle of the Boyne Visitor Centre