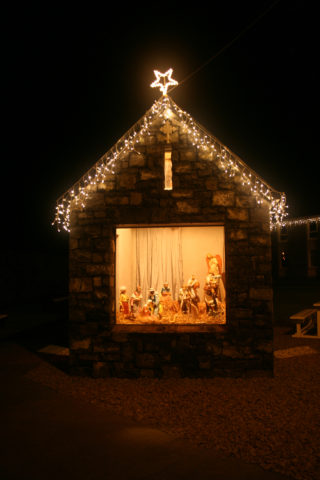 An Cillin at night
Coiste an Chillín 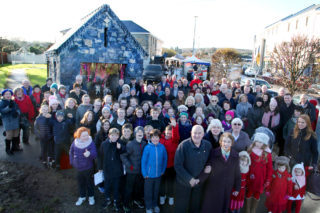 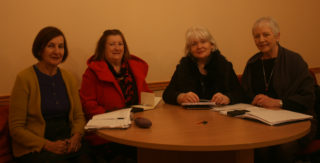 The Committee
Coiste an Chillín

Several years ago it was noticed that there were less cribs present in shopping malls and other public places .On one occasion at a shopping mall, there was a tableau display with a llama as the central figure .He was surrounded by musicians dressed like kings .A question was raised as to what this represented and the reply was that this was a crib .One evening in the shops in town while looking for a particular gift the air was filled with the sounds of Christmas melodies but none about the Christ child no carol just jingle jangle.

There was no room for him in the shops. It seemed that the commercial side of our society did not include the main characters that are the reason for celebrating Christmas. A couple of years ago a young Muslim mother was observed showing a crib to her little toddler. He was fascinated with the baby, animals and lights .He seemed to be indeed delighted .It was perceived that the crib could provide an opportunity to tell children the Christmas story. These are some of the back ground events that that took place 2 years ago.

There is a scripture group in our parish Lectio Divina which have been meeting each week for reflection on the gospel messages for the last 14 years .We try to live out the gospel message in our lives .One evening at the meeting we were reflecting on the scriptural reading about the birth of our lord .We were filled with happiness at the thoughts of the birth of Jesus .Afterwards on a cold night a couple of us remained talking and through our conversation we decided it would be wonderful to have a crib displayed in the very heart of our village .We first thought of having a temporary structure that could be assembled each year and taken down .Then it was decided that a more permanent stone structure would be better .

The structure as an ancient monastic Cillín

We had plans drawn up and approached a business man who owned a green area in the village and told him of our vision to have a crib in a public place. He was very receptive to the idea and gave us the permission to erect the building on this land .From there we had to apply for planning permission. We envisioned the structure as an ancient monastic Cillín such as Gallarus . It would be built of stone with a stone roof also. This vision was modified to include windows of hardened glass and gutters to keep the rain off the walls .The men decided to cut the limestone to make use of their particular skills. The roof material would be slate. It would be made as far as possible with natural materials and blend in with the surrounding environment. Yet it would still retain some of the character of the old monastic Cillín.

Throughout the years the crib committee sought advice from their parish priest Cannon Michael Mc Loughlin .He was very helpful and supported them generously and wholeheartedly with words of wisdom and practical advice.

With 16 figures in total

In the meanwhile the crib committee set about finding crib figures .They searched on the internet as they could not find what was required at the suppliers .You see they wanted large figures that would not succumb to the effects of cold or possibly damp .Eventually through the suggestion of a priest friend they found an Italian crib at he Liturgical centre, Blackrock, Co Dublin .It had been ordered 10 years previously by someone who changed their mind and had been stored at the shop over the years. .It was absolutely beautiful with 16 figures in total .Apart from the usual crib characters it had some extras, young shepherdesses carrying a water jar and another with wild flowers .There was an old shepherd with a musical instrument, an angel and a camel .All the figures were magnificent .They were made to endure inclement weather and were rubberized to protect them from breakages.

An evening of entertainment

In the meanwhile the Lectio Divina group helped the committee to fund raise .Christmas cards were printed, packaged and sold in the shops. Cake sales were organized by a group of wonderful ladies. Many raffles helped us raise money. An evening of entertainment was arranged by a local musician. A very substantial donation came from a local business man and a large grant from another company.

In the spring of this year the work was started by some skilled men under the direction of a foreman .A local engineer coordinated the project and spent much time meetings with us and searching for specific materials for our Cillin. Many of the local people donated building materials sand, cement and endeavoured to assist us in every way .There were various fundraisers throughout the 2 years. One of the innovative ideas was a crib exhibition .We had cribs from all over the world, some made with clay, others knitted. There were thatched stables.

On the feast of the Immaculate Conception the Cillin and crib were dedicated to the Holy Family. A large crowd gathered both young and old, grandparents and infants. The local school choir sang carols .Everyone rejoiced at the unveiling of the crib and the special blessing which took place.

Now after all the hard work we can see how it adds to our village making it special.

At night the crib is illuminated .It is a beacon of light on the long road from Galway to Clifden, a reminder to us all of the beautiful night 2000 years ago when Jesus came to be born among us to show us how to love one another.