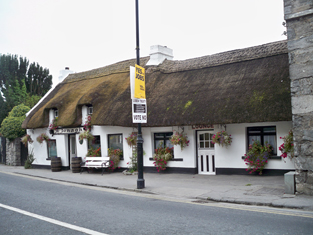 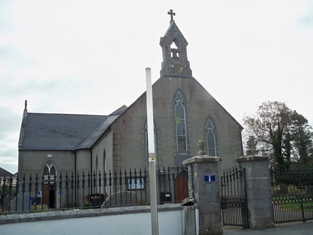 ORANMORE,a post-town and parish, partly in the county of the town of GALWAY, but chiefly in the barony of DUNKELLIN, county of GALWAY, and province of CONNAUGHT, on the road from Dublin to Galway, and on the bay of Galway, 4 ½ miles (E.) from Galway, and 100 miles (W. by S.) from Dublin; containing 6993 inhabitants, of which number, 673 are in the town. Here was an ancient fortress of the Earl of Clanricarde, who placed it, on the breaking out of the war in 1641, under the command of Captain Willoughby, who also held the fort of St. Augustine, at Galway; and both these he surrendered to the Catholic forces in 1643.

The parish comprises 14,220 statute acres, of which 14,197 are applotted under the tithe act: the land is of very good quality; there are about 100 acres of bog. The town comprises 97 houses, and is well built. A manor court is held here every three weeks, petty sessions every Thursday, and it is a constabulary police station; fairs take place on May 23rd and Oct. 20th, for the sale of corn and farming stock. The bay of Oranmore is shallow and full of rocks.

The living is a rectory and vicarage, in the diocese of Tuam; the rectory forms part of the union of St. Nicholas and of the corps of the Wardenship of Galway; the vicarage is in the patronage of the Bishop.

The tithes amount to £380. 5. 3., of which £300 is payable to the warden, and the remainder to the vicar. The glebe, which belongs to the warden, comprises 27 statute acres. The church is a neat building, lately erected.

In the R. C. divisions the parish is in the diocese of Galway, and is the head of a union or district, comprising this parish and that of Ballinacourty, in each of which there is a chapel: that of Oranmore is a neat slated building. There are four private schools, in which are about 188 children. At Murrough are the ruins of an ancient round tower, of which about 40 feet remain; the internal diameter is about 10 feet: the thickness of the walls is four feet, and the height of the door from the ground is about six feet: in the interior there appear to be courses of stone, on which to rest the timbers of a floor. Ruins of the ancient castle of Oran also exist. Oranmore gives the title of Baron to the family of Browne, of Castlemacgarret.