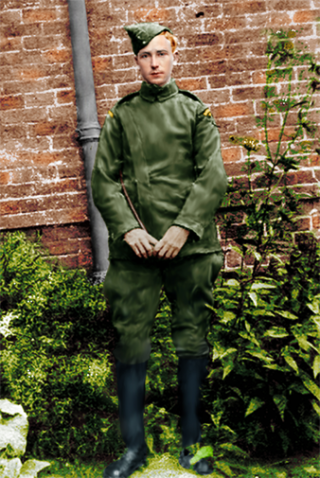 This is a story of my paternal Grandfather and the 2nd Battalion of Connaught Ranger’s at the Battle of Mons in WWI.
Regimental Number 9104 Sgt Michael Joesph Hanly(MJH) was born 1889 in Salthill, Galway in a Seaside house on what is now called Beach Ave at the intersection of Lenaboy Gardens and Salthill RD. Michael’s parents were Martin Hanly and Esther Brennan both of whom were from Galway County. The Hanly’s and the Brennan’s stem for ancient clans of Celtic people with roots that go back to the earliest known Celtic habitation of Ireland. The Province of Connaught has a long history of protecting its culture and today it has the largest number of Gaelic speaking people in Ireland.

When MJH’s was born his father was already retired from his position as Chief Constable with the Irish Police. In 1899 when MJH’s was 10 years old, his father died and his mother remarried but she also died shortly after in 1904, making the Hanly children orphans. These were extremely difficult economic times in Western Ireland. MJH spend the next 3 years in an orphanage.

In March of 1907, at age 17 he left the Orphanage and enlisted in the Second Battalion, Connaught Rangers. A Regiment of the British Army. The Connaught Rangers (CR) carried with them centuries of proud Regimental History having been named “the Devil’s Own Infantry” by Lord Wellington during the Napoleonic Wars. In August of 1914, after 7 years of service, MJH was a Sargent in the CRs. He was a professional career soldier in the best trained and most experienced combat Army in the World. As a result of Britain’s Treaty with Belgium and in response to aggression by Germany and others England declared War and World War I or the Great War as it used to be called was underway.

MJH and the CR were about to enter the greatest slaughter humanity had ever experienced. This was war on a scale previously not seen on this planet, It was 20th century mechanized war including chemical weapons. Winning battles meant your machines and poison killed more young men and boys than your enemy did. The First World War was nothing short of sheer madness with thousands of boys at a time running straight on point blank in to machine gun fire and certain death, it truly was insanity on a global scale.

MJH at age 24 and along with the rest of the 2nd Battalion of the CRs, were part of the British Expeditionary Force (BEF). BEF was Britain’s first group of troops sent to stop the Germans from invading and occupying Belgium and France. BEF’s first shots fired in WW1 were at Battle of Mons in Belgium on Aug 23, 1914. MJH and the Connaught Rangers fought at Mons; in fact they were the last British troops to leave that battlefield. BEF fought well, they laid down such a steady and accurate rate of fire many of the German soldiers thought all the Brits had machine guns. BEF was terribly outnumbered but they held their lines despite sustained artillery, small arms and in some cases calvary attacks . That said, it was clear to all that it would be a matter of time before the Germans would flank the BEF positions at Mons as they had already broken through French lines on either side and BEF was in real danger of being surrounded, so the call to retreat was given.

BEF at the Battle of Mons had less than 80,000 fighting men against more then 750,000 Germans. When the Retreat from Mons got underway MJH and the Connaught Rangers found themselves fighting for their lives; as they had the misfortune of being the “rearguard”. The CRs and the 1st Battalion of the Irish Guards were dead last in the retreat and the rest of BEF was in front of them heading south away from the Germans while the CR’s were left to cover their retreat by fighting several rear guard actions to slow the advancing 1st German Army.

For the next 48 hours MJH and the CRs would stop and fight and then retreat and then stop and fight again in a leap-frog fashion all the way from Mons, Belgium to La Grand Fayt, in Northern Central France. On August 27, 1914 after almost no sleep for 72 straight hours, at La Grand Fayt Grandpa Hanly was wounded and captured by the Germans.

MJH went on to escape from two German POW camps. In February 1918, after four years of German POW Camps, MJH was barely alive was part of a sick prisoners exchange and was transferred to internment camp hospital in neutral Holland. He was repatriated to England in Nov. 28 1918 and invalidated (discharged because of disabilities) from the British Army on March 23, 1919. He immigrated to Canada and landed in Quebec City in June of 1919.

May God ensure the world never forgets the fate of the 2nd Battalion of the Connaught Rangers as their fate was an awful tragedy. On Dec 6, 1914 the Second Battalion was absorbed into 1st Battalion at Le Toure, France. This was required because they had all but ceased to exist; of the 2nd Battalion’s 1032 Officers and other Ranks that landed in France on 14th of August 1914 there was less than 50 of the original Regimental soldiers remaining on Dec 6, 1914. The rest of Michael Joseph Hanly’s fellow Rangers who were young Irishmen and boys had been killed, captured or wounded!!! God Bless their souls! The 2nd Battalion of the Connaught Rangers became my Grandfathers family when he left the orphanage and joined them and their loss haunted him for the rest of his life.

MJH went on to active service in the Canadian Army in WWII from June 3, 1940 to March 10, 1943 (service # M-42269). He is one of my Greatest heroes, MJH died at age 97 in Edmonton, Alberta, Canada surrounded by his loving family. He is interred right nest to the flag pole in the Military Section of Edmonton’s Beachwood Cemetery in a spot he picked himself.

Below is a photo of a Shadow Box I put together using some of my Grandfather’s things as a tribute to Micheal J. Hanly. In addition to serving in WWI and WWII and he spent his peacetime life in service to humanity in organizations like Saint John’s Ambulance, The Royal Canadian Legion, The Canadian Corp of Commissionaires and The Legion of Frontiersmen. My family and I are extremely proud of this Man and the gentle loving soul he was warms our hearts to this day. 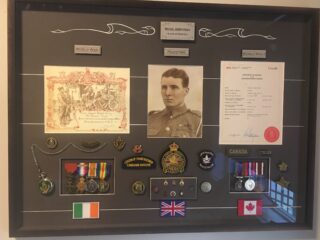