You are here: Home>Topics>Galway's Gastronomic Heritage- The History of Food in County Galway>Shops and Provisions>Shop Daybook 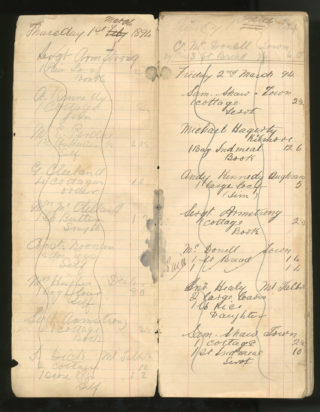 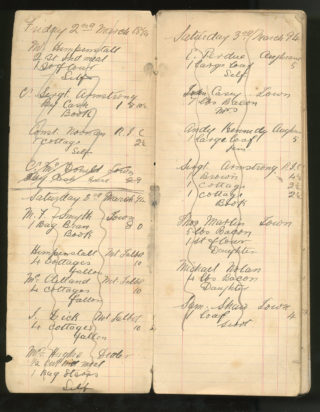 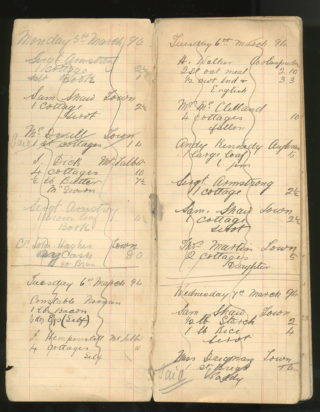 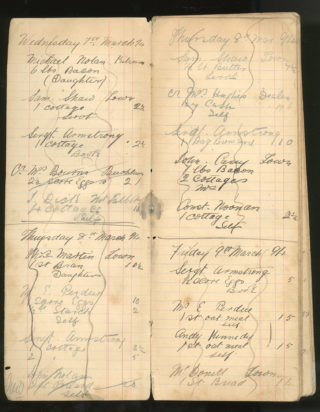 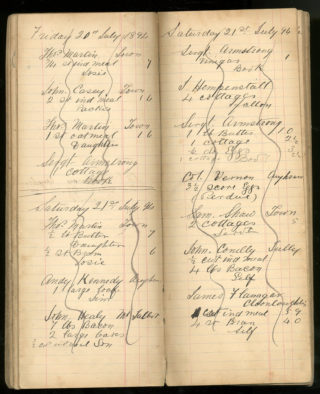 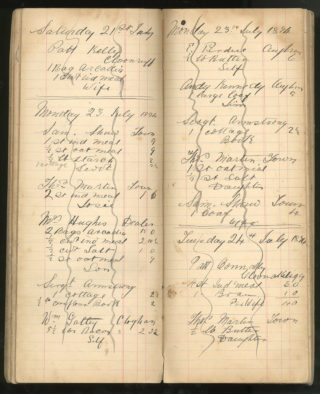 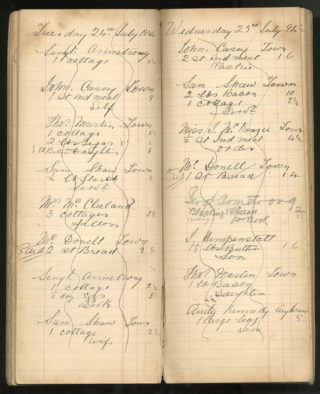 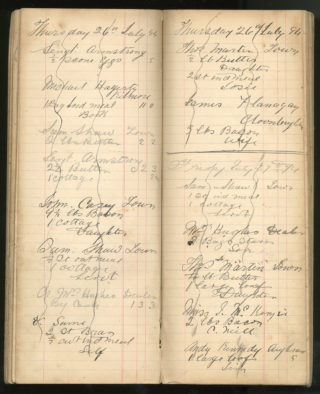 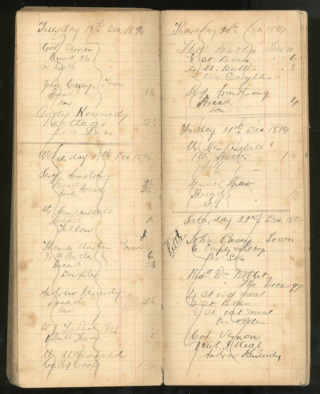 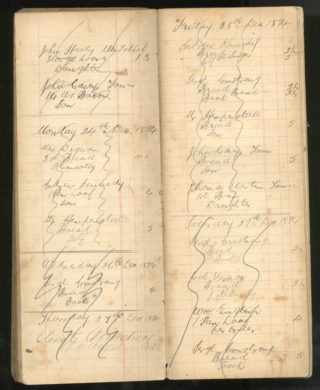 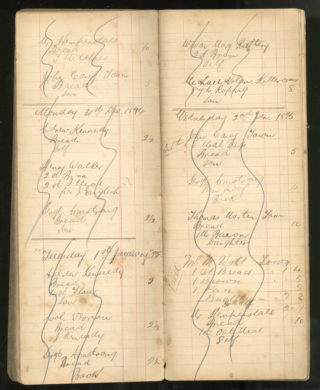 The ledger or day-book was given by Pat Gilmore, Ballygar and parts of it digitised for the Galway Gastronomy 2018 project. It was once the property of John Bourns Snr, a shop owner and farmer in Ballygar and contains about 200 pages. John Bourn’s shop later became Collerins. John was listed as a shopkeeper on the 1901 Census. He was born in approximately 1830 and was originally from Co. Mayo and a member of the Church of Ireland. He married Marie Pearson [Payson] Watters in 1880. Listed on the Census return at that time was a son John Cecil Bourns as well as William Finnerty and Malachy Ward who were shop boys and May Sweny, a servant.

The head of the household at Ballgar

John and Marie Bourns had 7 children including Maria Elizabeth born 14th November 1880, Ida born 24th February 1882, John, the eldest son born 15th November 1883, Albert Victor born 21st March 1885, Ethel born in 1887, Matilda Marshall born 14th June 1889 and Thomas Watters born 8th September 1890. Only 5 of these children were purported alive by 1911 when John’s wife Marie is recorded with 2 of the children (Albert and Ethel) at Araghty, Athleague, Co. Roscommon. In 1911 Marie was assisted by Julia Hetherington, a servant. John Snr was still listed as the head of the household at Ballgar, though his son John is not recorded as previously. Instead, a Peter Collerin is listed alongside a Roger Kelly. Both men were from Co. Mayo and so may have had a connection to the family. Bridget Conay, a servant, was also recorded there. The shop occupied a 1st class building of 13 rooms and 8 front windows.

Along with the shop the Bourns family held a stable, cow and calf-house, a piggery, shed and 2 store rooms. John Bourns Snr died on 31st December 1914 after a 2 week bout of bronchitis. Peter Colleran was present at his death. He died leaving effects of £2,423 15s 8d to a Henry J. Bourns, a farmer and son of a William Bournes and Jane Kenny of Ticooly, Killeroran.

He had entered the US with his wife through Vancouver

None of the Bourns sons inherited the family shop; John immigrated to the USA and in 1920 he was living with his wife Abbie Bourns at Gardena, Los Angeles, California and recorded his occupation as a ‘wrapper’ in a department store. He had entered the US with his wife through Vancouver, Canada arriving in Seattle on 16th January 1909. He was naturalised in August 1916 and was drafted in World War I and World War II. He died in Los Angeles on 10th September 1954. Albert Victor also left Ireland with a view to living with his family in Canada. He departed through Belfast and arrived with his wife Elizabeth and five children on 14th September 1929. He lived in Vancouver and worked as a Clerk. He died on 16th June 1950. The third and youngest of the Bourns sons, Thomas immigrated to Canada also, arriving in Quebec bound for Montreal on 26th May 1913. He joined B Company 6th Regiment Duke of Connaught´s Own Rifles and later in 1914 the Canadian Overseas Expeditionary Force, registering his occupation as a Clerk. He married Alice Stevens in 1919 and later worked at the Canadian Bank of Commerce. He died in Vancouver on 13th November 1982.

Ethel Marshall Bourns living at 66 Harcourt Street, Dublin married Henry Matthew Walker from Clooncannon, Ballygar on 27th February 1912. It is believed she died in Co. Down in 1964. Ida Margaret Bourns married John Carty, a farmer from Ballygar, in Boston, Massachusetts, USA on 16th November 1903 having departed Ireland from Queenstown and arriving in Boston on 15th November 1903. It is thought that Ida died in New York on 10th February 1960. There is some confusion over the fate of Matilda Marshall Watters Bourns but it is believed she died in infancy in 1890. Maria Elizabeth Bourns also died in infancy, aged 2 in Newtownards, Co. Down after a bout of croup. Her uncle, Francis Waters was present at her death.

The ledger obtained from Pat Gilmore outlines in handwritten accounts dating 1894-95 customer names and addresses, list of items and materials purchased, and amounts owing; some reference is also made to the party responsible for ordering and/or paying  the account with annotations of ’servant’,  ‘wife’, ‘son’ or ‘daughter’ or ‘self’ at the end of each purchase.

Unfortunately, the month of January and parts of February 1894 have been lost and the hard front cover has become detached. Customers recorded in the accounts include the Royal Irish Constabulary, locals from the town and from neighbouring County Roscommon. Included there are Henry Walker, an unmarried farmer from the townland of Coolaspuddaun, the Clelland family from Mount Talbot, John Healy and James Flanagan, possibly from the townland of Kilmore.

Not much more is known at this point about the shop except that it was located close to Walls Hotel in the town. From the details of the purchases we can conclude that they sold the main, basic provisions; bread, eggs and butter. Alongside these staples, the shop sold what was termed ‘cottages’, perhaps a term for a type bread loaf – it was the most frequent purchase made by customers. There is no record that tea was sold there until an entry appears in July 1894. It could be that local people preferred to buy their own tea from one or other of the travelling shops and so perhaps the shop didn’t stock it regularly. Aside from the above, the shop sold Indian meal and bran as well as rice, bread soda, starch, salt, corn flour, oat meal, bacon and ‘Pollard’. Pollard was a by-product of wheat flour milling and was given to hens, pigs and horses. It was high in fibre and it could be that the bran also purchased in the shop was used for the same purpose. The shop also stocked rope, soap, candles, thread and ‘blacking’, the latter purchased on a number of occasions by Sergeant Armstrong.

For those who did not have their own hens, eggs could also be purchased at Bourns’s shop as well as butter for those who did not make their own at home. For some purchases there are no amounts owing. This could be because there was a barter system in place and this would likely be for eggs. One customer, Mrs Hughes, is referred to as a ‘dealer’ for example, and there is sometimes no record of a payment by her.

It is interesting that even though Easter Sunday fell on 25th March 1894 there is no great up-turn in the sale of eggs or other goods in the shop in the days prior. On 27th March 1894 Sergeant Armstrong did purchase 1lb of Golden Syrup and made the same purchase again on 13th April. For the most part though, customers continued to buy butter, bacon, meal and bread. The meal was bought by the cut measure or by the stone or ½ stone.

Some items that are difficult to explain and are not known in our modern day language around food include a ‘bag of Starrs’ and a ‘bag of Arcadia’. It could be that these are local names for goods or shorthand terms used by the shop owner himself.

The most frequent customers were the RIC. On a daily basis Sergeant Armstrong, and Constable Noonan are recorded buying ‘cottages’ or butter or eggs. Other customers include Colonel Vernon and E. Perdue among whose purchases are hemp seed and Linseed meal. John Casey, J. Hempenstall, Thomas Martin, Andy Kennedy, Samuel Shaw and Mrs McClelland are also regular customers.

Some examples of purchases are included below, along with the names of those buying and the cost of the goods.