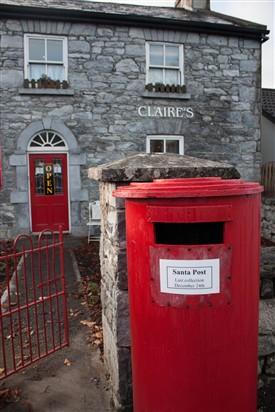 My memories of Christmas past is of another era totally removed from Christmas today.

The week before Christmas would be a very busy week for Mother. The goose would be killed, plucked and put to hang on a hook from a door in the shed for a few days. The killing of the goose would always take place in our absence to avoid us wailing if we heard the poor goose in pain.  We would all give a hand with plucking.  One year a neighbour’s dog ate one leg off the goose but no way was the goose thrown out.  It still was cooked and every morsel was eaten – there was no great concern with food poisoning back then.

A few days before Christmas, Mother would cycle to Patrick Jordan’s grocery in Clarinbridge to buy the “Christmas”.  The usual items – a bag of flour, sugar, tea, currants, raisins and spices were all put into a big wooden tea chest. Then Patrick Jordan would put in the “Christmas box” full of goodies, Christmas cake, bottle of sherry, few bottles of stout, raspberry cordial, a big red candle, jam, tobacco, and a few sweets for the kids.  Every house got a Christmas box from the shopkeeper in appreciation for their support during the year.  My father would arrive with the horse and cart to transport the Christmas box home.

This tea chest was much sought after.  It had many uses. The baby could be put in there to keep it safe from fire.  One year to our delight, Sandy our dog gave birth to four lovely puppies in the tea chest.

There was no Christmas tree back then but my father would cut a turnip in half, cut a hole and insert the big red candle.  This would be on our windowsill and last all Christmas. It was a magical time.

Our postman had a few very busy weeks delivering parcels and cards.  He cycled the country roads in all weather.  Each house would invite him in for a Christmas drink.  Also our neighbours would visit and have a drink during this time.

On Christmas Eve we sat around the fire listening to Santa on the radio telling us to be good girls and boys before he left the North Pole to deliver our toys. We were never disappointed the next morning – we were so happy with so little back then.

After Christmas dinner Mother would give us all a slice of the Christmas pudding, which would be hanging from the ceiling wrapped in a calico cloth for a few weeks prior to Christmas Day.  To wash it down, the raspberry cordial was shared around.  The glasses were lined up and into each went a dash of this cordial.  Nothing ever tasted as good.  Mother would have a little sherry and father would have a bottle of stout or two and smoke his pipe.

When the dishes were all washed the radio was put on for School Around the Corner, or The Foley Family, or carol singing while us kids played simple games of Snakes and Ladders or Ludo.

The smell of spices to this day reminds of those Christmases long gone.