Remembering a Christmas Past 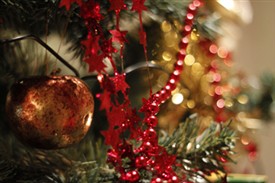 One vivid Christmas memory still stands out in my mind after all these years. We lived in Cork, and my Dad took my sister and me to the Cork Cycle Company on Merchant’s Quay to visit Santa Claus.  For eleven months of the year this store was an ordinary bicycle shop.  But come December it became a Christmas Wonderland.  It was the most magical place you could imagine.‘It was very expensive’, my Dad said, but because we had been good we were getting a treat.

The biggest Christmas tree I had ever seen.

In hindsight I know my Dad loved Christmas, and this was right up his street enjoying our sheer wonder and amazement looking up at the hanging lanterns and little Santa decorations swinging from the ceiling.  Massive fan-like gold decorations dangled over our heads.  Christmas carols played in the background.  Over at the window stood the biggest Christmas tree I had ever seen.    It glittered and shone with silver tinsel and strings of golden stars.  Beautiful coloured balls dangled here and there and tiny little white candle lights flickered on and off in between the branches.  We had never seen fairy lights and we begged Dad to buy some for our own tree, but he told us they were not for sale!

We joined the long queue of children to finally go to see Santa.  This was fun, two elves helped us climb up a long, long ladder. They told us we were going to see Santa on a magic carpet – big cheer from all the children. We were to have our list ready for Santa as he was very busy and had a lot of children to see.  Dad said ‘Now don’t be greedy, and ask for too much, Santa has to go to every child in the whole world, and he needs toys for all of them’.  I wanted a bicycle with a bell on it and that was what I was going to tell Santa.

We reached the top where two more elves helped us on to a hairy mat, which tickled our little legs.  Dad stepped aside, the elves gave our mat a giant push and the mat whizzed down the slide at electrifying speed, through the cave door and we landed at Santa’s feet.

We were speechless, our breath taken away, but Santa hugged us and when we found our voices I asked for my bicycle and my sister wanted a doll’s house. After that all other visits to Santa Claus paled into insignificance.