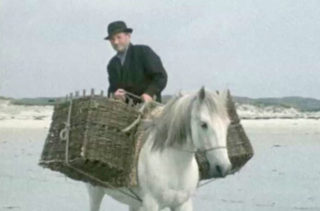 The wild weather, lack of employment and a dwindling population are all part of life for the island dwellers of Inishbofin.

While it has its attractions, the exposed Inishbofin Island off the coast of Connemara in county Galway offers little to young people and faces an ever-declining population. Pat Tierney’s journey to the bog is comparable to a Mexican trying to cross the Rio Grande.

The hardship of island life is clear as Pat Tierney transports his turf at low tide on horseback. There are many reasons for young people to leave the island. The weather and lack of employment opportunities are two factors at work. But what do young people really think of living on the island of Inishbofin?

More and more people are forced to leave

The young people featured in this report don’t want to go but must for education or employment opportunities. In summer time there’s a lot to do. In winter, not so much.

Some island residents fear for the future of Inishbofin as more and more people are forced to leave the island to make a living. The problems are compounded by the fact that Inishbofin is not a Gaeltacht island and as does not benefit from the grants, aid and funding available to other remote areas in the region.

Many islanders fear progress on the grounds that they may lose some of their social welfare entitlements upon which they are dependent to survive.

Fuel supplies are also scarce with few turf banks and residents dependent upon straw turf to keep them warm. This has implications for other areas of farming by removing rough grazing for sheep. However, there are no alternatives for fuel on a treeless island.

The oldest inhabitant on the island is 86-year-old Pat Lavelle. In his youth, the population of Inishbofin was around 2,000 people. Up to 50 boats employed around 250 men in the fishing industry. Emigration, the Cleggan Disaster of 1927, and the decline of the fishing industry have resulted in a population today of 247. Pat recalls his early life on the island when people shared many skills and trades, which helped to make the islanders more self-sufficient. There was a weaver, there was a tailor, there was a blacksmith, there was a shoe maker, and all these were professional men.