You are here: Home>Topics>Galway's Gastronomic Heritage- The History of Food in County Galway>The Land, Water and Food>Poteen Could Be Worth £20 Million. 1977 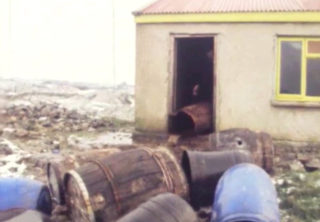 Illicit poteen production in Connemara and a proposal to legalise it could provide a much-needed jobs boost for the local economy.

Lettermullan in the Connemara  Gaeltacht is the setting for a battle of wits between Gardaí and poteen makers.  There was a time when poteen (poitín) making was almost exclusively confined to the pre-Christmas period for those willing to take the risks, but it is now a financially lucrative year-round operation – if you can keep one step ahead of the law.

Local Garda Superintendent Patrick Gallagher says that in 1976 alone, there were 49 seizures of illegally brewed beer and poteen, with a value of £63,000.

Gaeltacht co-operative, Comharchumann Cois Fharraige, has researched the benefits of legalising the production of poteen and claims that the establishment of small, local distilleries could create a £20 million business.  Spokesman Michael Lally talks about the prospects of legalisation involving licensing, and quality control, and envisions,A tightly controlled operation, not a free for all.

When it became too risky

There were some who were prepared to admit that they had made poteen once upon a time.  Paddy Moran, along with his brother and father, made poteen on a small scale, but stopped when it became too risky.  He was lucky enough never to be caught by the Gardaí, as he always made sure his bicycle lights were working when he was out and about on the roads at night.

But it’s not just about the financial gains, or the cat and mouse game with authorities.  Dr Connell Cunningham describes delirium tremens and cardiac damage as two of the risks associated with poteen consumption.  He does not recommend the old cure of a drop of poteen for treatment of flu.  I don’t think poteen has any place in the treatment of any condition.

Pay off their debts before Christmas.

Father Leo Morahan, the parish priest of Rosmuc, acknowledges that in olden times poteen was brewed out of necessity, so that people could pay off their debts before Christmas.  He does not agree however with poteen production as a money making business, and objects to the current situation, which has resulted in poor quality poteen being sold.  Father Morahan gives a philosophical view on the legality of poteen production,

Theologians have long been divided on whether it is morally wrong always to do what’s legally wrong in civil law.