You are here: Home>Topics>Geology>Geological Heritage Audit of County Galway 2019 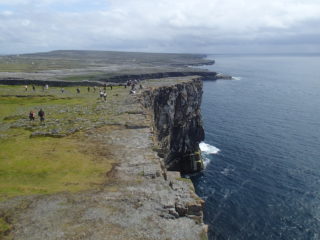 Sea cliffs on the southern edge of Inish Mor on Oileann Arainn. The cliffs expose beds of limestone and bear testament to the ferocious power of the Atlantic waves. The ice sculpted, bare limestone pavement of the rest of the island terrain is seen in the distance. 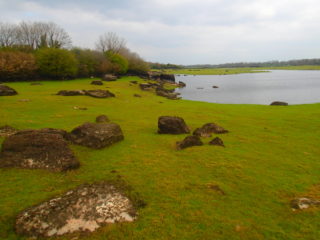 Rahasane Turlough, near Kilcolgan. Moss lines on these boulders give a watermark for the depth of water in winter, when the turlough floods fully.

County Galway is widely known for its geological heritage, but this is understood or expressed for most people as the landscape or the scenery. Since it is one of the largest of Irish counties, and because bedrock is in many parts generally well exposed, it has an extensive range of geological heritage sites. However, it also has some of the most complex geodiversity in the country leading to many significant geological sites.

The report documents what are currently understood by the Irish Geological Heritage Programme (IGH) of Geological Survey Ireland (GSI) to be the most important geological sites within County Galway. It proposes them as County Geological Sites (CGS), for inclusion within the County Development Plan (CDP). The audit provides a reliable study of sites to replace a provisional listing based on desk study which was adopted in the current 2015-2021 CDP.

County Geological Sites do not receive statutory protection like Natural Heritage Areas (NHA) but receive an effective protection from their inclusion in the planning system. Some of the sites described in this report are considered to be of national importance as a best representative example of a particular geological formation or feature. They will be provisionally notified to the National Parks and Wildlife Service (NPWS) by the GSI for designation as a Natural Heritage Area (NHA). Designation would only occur once due survey and consultation with landowners is complete. In parts of the county, many of the sites fall within existing pNHAs and SACs where the ecological interest is actually founded upon the underlying geodiversity.

In total, Galway now has one hundred and thirty four sites which are classified as County Geological Sites.  A further thirty sites were visited and mapped but were not deemed worthy of this status.