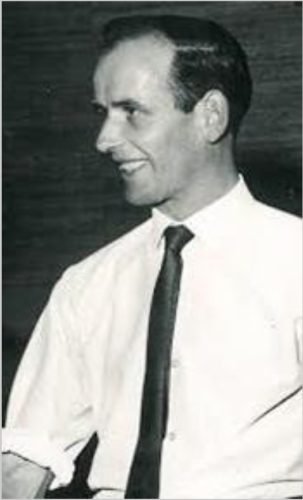 Johnny Cummins of Taramuid may be best known to Galway GAA supporters as father of Galway’s All Ireland winning goalkeeper in 1987 and 1988, but for many people he is best remembered as Paddy Burke’s ‘Right Hand Man’. The affable Johnny Commins lives in Gort since 1960 but it only takes a few minutes talking to him to realise that part of him has never left Clarinbridge. Johnny, now widowed, was married to Bernie Fleming, whose father Tom (Barrack St, Clarinbridge), was a veteran of the 1916 Rising and later a County Councillor.

Johnny Cummins grew up in a strong GAA household, with his father John playing on the Senior team in the 1931 and 1939 county finals. Johnny played for Clarinbridge and later Gort where he had the honour of hurling with the great Josie Gallagher.

Johnny Cummins worked as barman in Paddy Burkes for 20 years, beginning in 1951. He describes Paddy Burke as ‘as man before his time’ without whose business drive Clarinbridge would never have become associated with the oyster. Paddy Burke, who attended secondary school in the ‘Bish’ in Galway, returned home to take over the running of the pub from his elderly father Tom. Johnny recalls those years with nostalgia, though he worked a 70 hour week for £5/week salary ! He is quick to say that Paddy Burke was a fair man and great man to work for.

Johnny recalls the minute details of the Clarinbridge Oyster Festival, which was centred around Paddy Burke’s Inn. He won the Oyster Opening Competition in its first 3 years in 1968, 1969 and 1970. He recalls the visit of Princess Margaret to Paddy Burkes in 1968 which was at the beginning of the Troubles in Northern Ireland. The event generated huge publicity worldwide. After the visit Paddy Burke received letters and newspaper articles from all over the world and it was this publicity that made Clarinbridge an international name. There was a twist in the tail for Johnny, however, when he received an unsigned letter saying that he should be ‘ashamed of himself’ for shaking hands with Princess Margaret, given the proud Republican tradition of the Flemings.

Johnny said that he opened about 3 million oysters in his time in Paddy Burkes and it was little wonder that the won the first three Oyster opening titles. He says that Paddy Burke was a great businessman but also a funny charming man. “He had the funniest laugh I ever heard”, Johnny said and “ when he laughed everyone in the place laughed”.

In the early years Paddy Burkes Inn served only oysters, smoked salmon and was one of the first to introduce the Irish coffee. Una Burke, Paddy’s sister made wonderful brown bread to accompany  the oysters and Guinness. Johnny said that Burkes always attracted a ‘passing trade’. He laughs as he recalls the closing hours at that time which were 10 pm midweek and 7 pm on Sundays.

Johnny remembers Clarinbridge village in the 1960s and 1970s as a very friendly village which had great characters such as Tomasin Neiland, Patrick Jordan, Gerald Kelly, Canon O’Dea and his housekeeper Bridgie O’Grady. Johnny fondly recalls Paddy Burke for his infectious laugh and witty yarns which regaled locals and visitors alike. Both Paddy Burke and Johnny Cummins are legends who will never be forgotten in the ‘Bridge. Johnny concludes that “ if Paddy Burke hadn’t started the Oyster Festival the Clarinbridge oyster would never have been heard of  and now its ‘home of the oyster.“