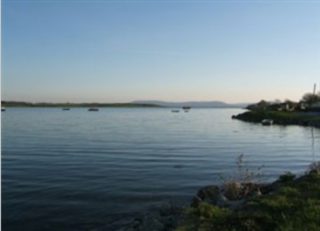 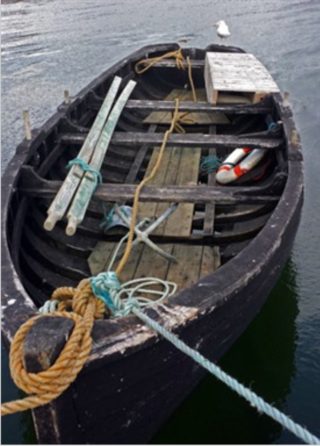 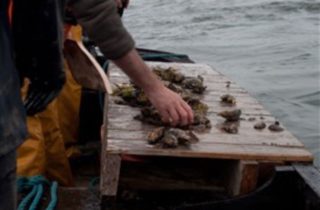 Sorting the Oysters on the 'Stage'
Clarinbridge Heritage

“Once, there were 150 – 200 boats fishing for oysters, mostly by local fishermen out of Cave, Clarinbridge. Sometimes they were joined by seasonal fishermen from other areas, like Kinvara, or from along the coast as far as Connemara. At times there were so many boats, you could ‘walk’ from one side to the other of the bay across the working boats. Now there are only 16 boats fishing the same grounds.”

The fishermen live locally, and their work of seeding, growing, sorting, marketing and replacing the oyster goes on, using much the same tools as in the past.

Oysters grow in a clean, shallow, mix of sea and fresh water. Dunbulcaun Bay, on which Clarinbridge is situated, is the ideal environment, and oysters have grown there for thousands of years. It was one of the few places in Europe that survived the over-fishing of oyster-beds that took place in the nineteenth century.

Oyster boats are adapted to maximise their stability and efficiency in fishing shallow waters and rough conditions.

Yawl – Now the most commonly used boat for oyster fishing. Usually, 18’ – 19’6” long, it is a deeper (and heavier) boat, with a keel. The keel makes it more stable in the water, but not so easy to beach with a full load. Although powered now by an outboard motor, oars are always carried.

Currach – An oak-frame boat built with larch strakes, measuring approximately 19’ 6’’ in length. In the past usually rowed by two men – one on either side of the boat – it is now most often powered by outboard engine. No keel makes them more maneuverable in shallow water and they can be beached if required.

Oyster ‘Flat’. “In a few inches of water you could swim a flat.” A shallow flat-bottom carvel-built boat constructed from larch strakes over an oak frame, but without canvas or tar covering, it is easy to use in shallow water. Unsafe in deeper seas or heavy weather, it is used for seasonal rather than all-year-round fishing.

Stage: A platform to one side of the boat’s stern onto which the catch is emptied and sorted. Frequently covered with metal to protect the timbers.