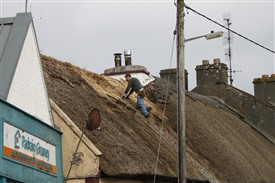 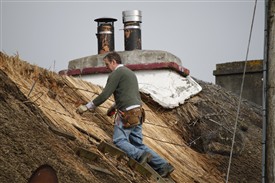 In March 2012 we had the opportunity of speaking to Michael Fahy from Inverin, Co.Galway while he was thatching a cottage at Sea Road, Clarinbridge. Michael is originally from Ardmore, Co.Waterford but his father was from Galway. He is a professional part-time thatcher who qualified initially as an architectural technician and came to Galway in 1990 to work. He found that he didn’t like the work and prefers variety and outdoor work. He who met a thatcher in Galway and became interested in the occupation. Michael says that it takes about two years “before you have the confidence necessary to go up on a roof and feel you know what you’re about”.

Thatching can be done at any time of year, but is dictated by weather conditions and the supply of thatching materials. Thatch can be straw or reeds. Straw doesn’t last as long as reeds as it begins to break down after about five years. Reeds can last for 10 or 15 years if the thatching is well done.

For this work, Michael was using imported Turkish reeds. While they are good quality, their straightness can cause the thatch to be too dense, which may result in water lodging between the reeds. If this happens mould begins to form.  This can be counteracted by making the thatch a little looser than if using Irish reeds. Irish reeds grow a ‘little more crooked’, so allow better air circulation through the thatch. This avoids the problem of mould formation.

If reeds grow in polluted water it damages their water-proof properties, and the thatch will break down quickly. So great care must be taken to source reeds from unpolluted water. Michael was hoping to cut his own reeds from the Turlough in Ballinderreen in the near future. These would be his preferred reeds.

A full thatch would be about 350cms (14inchs approx.) deep. As he is repairing the thatch he is putting on is about 230cm/ 9inches deep.

When on the roof the thatcher uses BIDDLES , which are small wooden slats or platforms on which he kneels fixing the reeds.  A number of these are hooked horizontally into the underlying hazel and give him a secure platform from which to work.