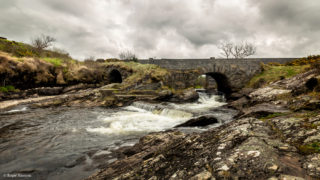 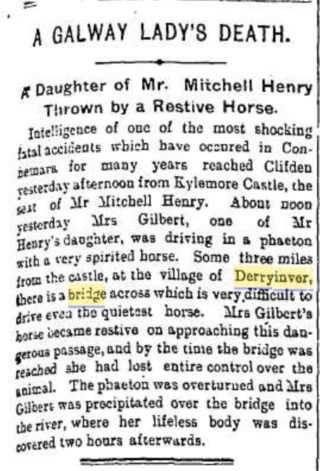 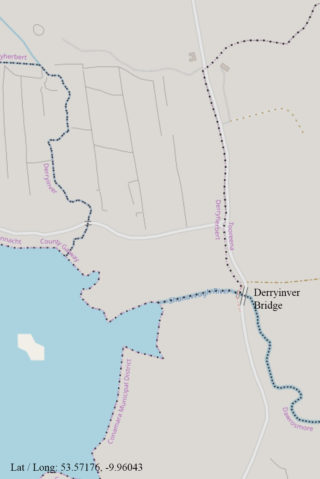 Although the Bridge that spans the Dawros River is commonly known as Derryinver Bridge, it’s not actually in the townland of Derryinver but spans the boundary between the townlands of Dawrosmore and Tooreena and was the scene of a tragedy in the late 19th century.  The Manchester born, Mitchell Henry, began building Kylemore Castle in 1867 as a token of his love for his wife, Margaret Vaughan Henry, after bringing her to the valley of Kylemore in the 1840’s on their honeymoon. They raised a family in the castle and on Wednesday 21st of September 1892 their daughter, Mrs. Geraldine Gilbert, was out for a drive in a phaeton, a type of 4 wheeled, open, horse drawn carriage. Approximately 3 miles from home, she came to the bridge across the Dawros River where her horse bolted and she was thrown into the river below where she sadly drowned. Her father, Mitchell Henry, was so heartbroken by the loss of his daughter that he decided to sell Kylemore Castle and in 1903 he sold it to William Angus Drogo Montague, the 9th Duke of Manchester.