You are here: Home>Topics>Galway's Gastronomic Heritage- The History of Food in County Galway>Famine>The Famine Pot Recipe 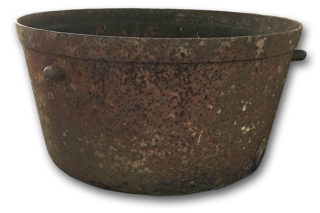 A field near the farmyard here at Tullaboy has always been referred to as the Boiler Field. A French drain has been constructed diagonally across the top of the field and this carries water except in circumstances where there has been no rain for a month or so. The water flows down close the cow shed and that is where a large cast iron pot was located so that the cows could drink from it. The pot in question holds about 40 gallons and has three short handles on the side and close to the top. This pot was used to make soup during the famine years and was probably located at Maam Cross where Captain Blake of Doon set up a soup kitchen in 1847. Fortunately, it was never damaged or broken while being used as a drinking trough for cattle but I have now removed it to a safer location and I propose to make it available for display in the Courthouse in Oughterard.

The pot may well have been used to make soup according to the recipe of Alexis Soyer, a French-born chef, who was a celebrity in early Victorian London.. One of his soup recipes ,as used in Ireland during the famine, was:

The cost of making the 2 gallons of soup using this recipe was just 1s 4d!

On reading an article in a newspaper telling of how bad things were for the soldiers fighting in the Crimean war (1853-1856), Soyer asked to be sent there. In Scutari, he discovered that they had good meat but couldn’t prepare it properly. It was often under-cooked and the stock was thrown away. He designed a stove that could burn any fuel. This was like a large pot-bellied stove and could cook for up to 250 people. It could also be easily carried on a cart or mule. Soyer made soup, organised the cleaning of hospital kitchens and came up with new recipes so that hundreds of lives were saved. While Florence Nightingale looked after the wounded soldiers, Alexis Soyer made sure that they had good nourishing food to eat.

I believe that most of the British Army’s Soyer stoves were lost when the ship carrying them was sunk during the Falklands war in 1982.

While it is generally accepted that the Famine lasted from 1845 to 1851 a book by Mary O’Sullivan dealing with the problems associated with proselytising in the Oughterard area mentions the fact that there was a great poverty and a serious shortage of food and fuel in the Parish of Kilcummin in 1862 and 1863. Headlines such as “Distress in the Parish of Kilcummin” and “Famine in Oughterard” appeared in newspapers in 1863. Poor people could be seen on the streets of the town early in the morning hoping that they might get some work. Others made sweeping brushes from heather which they sold at 2 pence or 3 pence each. There were no public works going on and all, both old and young, were dependant on clergy. Fr Michael Kavanagh, who was the parish priest in Oughterard at that time, wrote a letter to the Times newspaper in which he said that the hardship was worsening rather than improving and that it appeared to him that 1863 would be even worse than the year when the blight affected the potatoes for the first time. He gave an example of one man whose cow had been taken from him for failure to pay his rent leaving himself, his elderly mother and eight children without their only source of food. A relief committee had been set up in the town in 1852 with John Doig of Oughterard House as treasurer and involving Fr. Kavanagh, Rev’d R G Brownrigg (C.of I. Rector), and Rev’d W C Campbell (Wesleyan minister) and George F. O’Fflahertie of Lemonfield. The committee did its best to raise funds and help those who were in greatest need although Fr Kavanagh once complained that funds given by some were for proselytising purposes and that the committee charged a shilling a stone for grain and a shilling a hundredweight for coal.