You are here: Home>Places>Headford>Places>Cahergal Fort 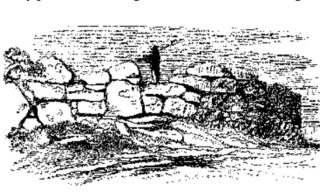 The great uncemented Cyclopean stone fort to which this extract refers still encircles the brow of the little island, as shown in the following illustration, but the scrubby brushwood around it partially obscures the masonry, which stands over a deep trench or fosse, that must have rendered its capture a matter of much difficulty before the general introduction of fire-arms. In all probability it served like a crannóg to guard Cairrgín Castle, or as a safe refuge for the persons and valuables of its inmates, or those of the surrounding country.There can, however, be no doubt that this structure belongs to the days of the unmortared dúns, cahers, and cashels long prior to the date of the Anglo-Norman invasion.The walls average six feet thick, and are still ten and a half feet high; but the stones of which they are composed, owing in all probability to the fact of their having been carried from the neighbouring mainland, are of comparatively small size.They enclose an oval space of one hundred and forty-four yards in circumference; and the doorway is on the east or land side, where the ditch is level to afford means of access.The present name of the island on the Ordnance Map is Ilaun Carbery, because a fanatic named Carbery lived for many years during the eighteenth century in a hut he built for himself within the enclosure.

It gives its English name to the townland

About two miles east of the lake, in this parish, stands Cathair Geal, or “Whitefort,” one of the finest specimens of ancient military architecture on the mainland of Ireland, and which can easily be reached by the roads leading from Coill Beag or Claoideach to Headford.From its colour it gives its English name to the townland, as, for similar reasons, we meet with the names of Roundfort and Darkfort, etc., in other localities.

The magnificent circular Cyclopean building, a portion of the external face of which is well shown in the subjoined illustration, encloses a space of one hundred and thirty-seven feet in diameter; and its massive walls of unhewn stone, of a whitish hue from the lichens covering them, are nine feet four inches thick, and, although lowered in many places, still average seven feet seven inches high.

The entrance on the south-eastern side, over the road leading to a farm house, is seven feet six inches wide; its external jambs, measuring five feet eight inches over ground, are each five feet broad, and twenty-one inches thick.Inside, on the south-east, is a fight of three massive steps, figured on the next page, which probably led to a parapet, as at Stague fort, in Kerry.Within the enclosure there are the remains of several intersecting walls; but, as the space is grass-grown, it is difficult to say whether they are the ruins of Clocháns,[fn42-1] of which there is a tradition.