You are here: Home>Places>Headford>Places>Cargin Castle 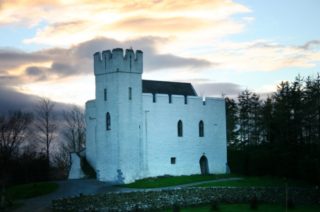 Cargin Castle has been a landmark on the Eastern shore of the Corrib for almost 7 centuries. For long a neglected ruin, the Castle has been restored to it’s former glory, using the same materials and techniques as the original 13th. century builders Modern comforts have been incorporated without detracting from the charm and simple grandeur of this ancient dwelling, a rare beautiful example of the medieval ” Hall House. Despite its massive castellated wall, Cargin was never a mere fortress but rather an elegant home where a land owning family could have security in turbulent times. For 10 generations , the castle was occupied by descendants of its founder, Adam Gaynard III,the grandson of a Norman adventurer who took part in the colonisation of this locality in the early period of the Norman invasion .

Sometime in the middle of the 17th. Century a period of intense turbulence in Irish History, another military adventurer, George Staunton acquired ‘the castle and the lands of Cargin which his descendants continued to own until 1946. By then the castle had long been abandoned and the roof was stripped in the early 18th. Century. Mush of the stonework was demolished to make lime for the construction of the nearby Georgian Mansion. However due to the efforts of the present owner the castle has been restored to its original majesty and glory in 1970- for that we are thankful.