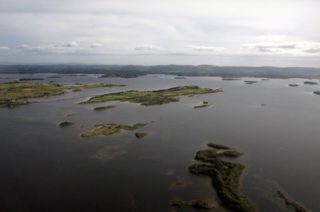 Greenfields owes its fame to not only having a very pleasant location on the lakeshore, but also it is by far the most important fishing berth on the east shore of Lough Corrib. In early Summer, it is agog with activity as anglers gather from all over the world for the trout fishing, when the mayfly rises. Leading from Greenfields, stretching across the water is a long, narrow roadway. This road was built in the early 1960s, and links Inchaquin, one of the largest islands on the lake, to the mainland. Indeed, according to William R. Wilde, it encompasses an area of 229acres, and supported 14 families in 1909 (Galway Express, July 1909). It has associations with St. Brendan the Navigator, who it is said built a church there. However there is little trace of that building now.