You are here: Home>Places>Headford>Places>Kilbeg Pier 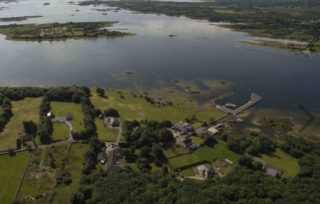 We come to Kilbeg on the lakeshore. This is the narrowest point of the lake and directly across from Kilbeg on the west side is Knockferry .The pier which extends a short distance out in the lake is a reminder of former days . Little used now except by anglers and the occasional pleasure boat,it was used extensively in the past as a stopping point when ferries travelled regularly on the lake from Cong to Galway. The steamer ‘St. Patrick ‘operated between Galway and Cong up to 1914 and was obviously in demand as the timetable indicates.”leaves Wood Quay ( alway) on Mondays Wednesdays and Fridays for Cong at 12 noon calling at Kilbeg and returning from Cong on each alternate dayduring the Winter months. In Summer from 15th. March to 15th. October ,she leaves Wood Quay at 3.00p.m. returning from Cong the following day at 8p.m. One hopes the endeavours of many people on both sides of the lake to build a bridge across the water at this point will come to fruition.