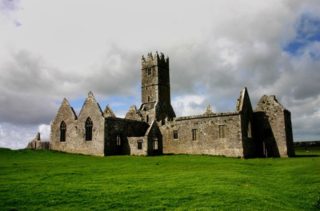 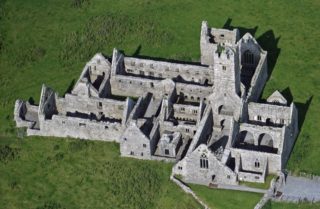 Standing in serene solitude on the South bank of the Black River, just two miles West from the town of Headford in Co. Galway the Franciscan Friary of Ross is recognised by many historians both past and present as the best preserved monastic ruin of its period in Ireland. It was founded in 1349 by the then Archbishop of Tuam Dr. Malachy MacHugh, who was a native of the Headford area and, as it happens, a member of the Franciscan order. The story of the foundation of the Friary is still told today with the same fervour and fascination as it has been for the past six hundred years.

Totally exhausted from his labours

The story goes, that during the reign of Archbishop MacHugh a great plague “The Black Death” was rampant in Ireland and it was particularly bad in the Tuam area. Many people had contracted the plague and the priests of the area were constantly being called out to the sick and dying. In fact some of the priests themselves had fallen foul of the deadly disease while performing their duties and had died as a result which meant that the Archbishop too was going out in order to help his priests. It is said, that late one evening he returned to his house totally exhausted from his labours and having spent the day administering to the sick and dying and after having had his supper and before retiring to his bed, the Archbishop then went to the church to pray for an end to the plague and for the strength to continue his work. While praying he is said to have fallen into a deep sleep in which he had a dream. In this dream he was visited by an angel, who told him, that in order for his prayers to be answered and the plague to end that he must build a Friary for the poor friars. He asked where the friary was to be built and was told to go West from Tuam to Headford and to the townland of Cordarra and that a sign would be given to him there.

The following morning he, along with three of his friars set off from Tuam, about a mile North of Headford they stopped their chariot at Cordarra and waited for the sign. After a short time three swans, each with a bunch of flax seed in his bill, rose from the long sedges which were beside them on the roadside and circled around three times. They then flew westward towards the Black River and alighted on a The West Windowsmall rise in the middle of a marshy piece of ground not far from the rivers bank. The Archbishop and his friars went to the place where the swans had alighted and found that they had disappeared, but in the spot where they had landed they found growing three bunches of flax in full bloom even though it was still only the month of February. The archbishop took this as the heavenly sign promised to him in his dream, and so, together with his monks he went to the nearby church at Kilursa, which had been founded by St. Fursa, patron saint of our parish and nephew of St. Brendan the navigator. After some time of prayer and fasting, the Archbishop and his monks together with local craftsmen returned to the spot and began to dig the foundations of the original Friary. This was the year 1349 and it is said that when the foundations were complete, that the plague ended. The first stage of the Friary took three years and was completed in the year 1351 but the Archbishop himself never lived to see it, he died from the plague in 1349.