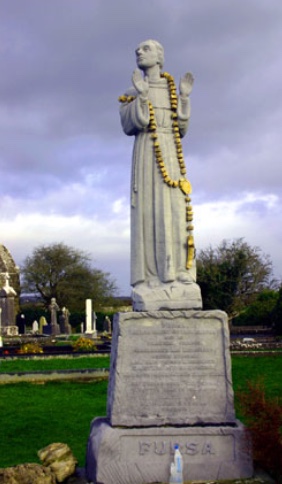 Killursa is about 1.5 miles west of Headford on the Greenfields road. It is a ruined church set in an extensive graveyard. The ruin measures 70feet by 24feet, and it has a gothic pointed doorway, and a large mullioned gothic window, which indicates that the present structure was erected after the Norman invasion, 1169. A wall was built across this church, probably cutting off a section for the officiating clergyman, who had his habitat there.

Killursa means the church of St. Fursa whose statue one sees as one enters the graveyard. It was here St. Fursa had the famous visions of the unseen world, which grave authors assert inspired Dante to write his “Comedia Divina”. Among those visions, Fursa narrates how the holy Bishops Meldan, and Beacon appeared to him, and described the enormous evils of pride, especially spiritual and intellectual pride, and they told him that abstinence, and self-denial were unavailing, unless the soul was cleansed from malice and iniquity! This same Fursa is remembered in Peronne, a small town east of Paris. Here he preached in the 7th century and we can see a fine statue of him in the Catholic Church in Peronne, and there is also an alleyway and a pharmacy called after him!