You are here: Home>Places>Killimor Heritage Group>Topics>Boot and Shoe Repairs in 1916

These are pages from an old Passbook belonging to the Flannerys who were shoemakers, and which dates from late 1914 to 1918.    The Passbook reflects a wide range of customers, and the economy and thrift practised in those years when people had their boots and shoes repaired so they would last for a long time. Most names recorded in the Passbook are long gone from Killimor.  Customers included McDermotts, Ruddens, Matthews, Pelleys, Tierneys, Kearys, Whelans, Greallys, Clarkes, Conroys, Horsemans, and Ryans of the Post Office and their relations the Foleys. Flannerys had their own unique way of documenting customers with entries such as “David’s new boots” which cost 17s., “Essie’s boots soled” for 1s.3d., “Young Dervan” soled and heeled for 4s., “Young Whelan reps” for 6d. and “Young Penders reps” for 1s.3d. The months of October, November, December and January were the busiest time of the year when most repairs were done.

The pages displayed show “Master’s Boots soled and heeled”, the Master in question was the local school headmaster, Johnny Robinson.  Ellie Larkin and M. Larkin were Johnny Robinson’s relations who resided with him.  Mr. Hickie and Miss Hickie came from the McDermott family in Ramore.  The second page documents the accounts of Mrs. Matthews and her family. 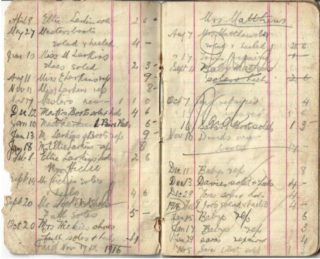 This is a page from one of Mrs. Julia Griffin’s ledgers.  The account book, or ledger, covers the years 1911 to 1924.  The accounts were written in pen and ink or indelible pencil.  She stocked a wide range of goods such as the staple foods, animal feeds, household necessities, drapery, footwear, hardware and religious objects.  Loose slips of paper, found in the ledger, indicate that Julia Griffin held an account with one of her own customers, Martin Connaire.  Martin was a local blacksmith who shod trap and dray wheels, repaired the trap, made wheel rims and shoes for the ass and pony, and even painted eave-chute holdfasts for her.   The page shows that Mrs. Julia Griffin settled her account with Martin Connaire in November 1916. 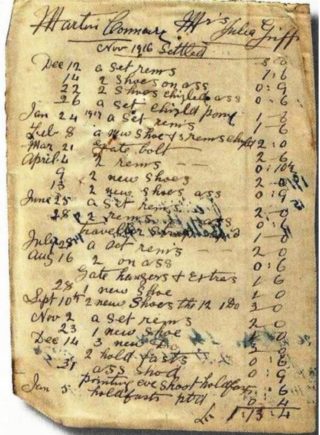