You are here: Home>Topics>Galway's Gastronomic Heritage- The History of Food in County Galway>Self Sufficiency>Potatoes>Poitin in Cois Fharraige 1977 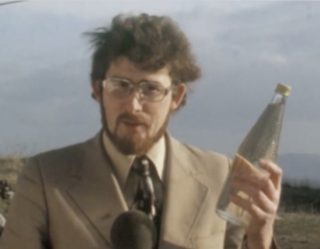 Comharcumann Cois Fharraige has a plan to legalise and develop illicit poteen making into an industry for the west of Ireland.

Michael Lally of Comharcumann Cois Fharraige outlines the proposal for RTÉ News.For generations, poteen-making has been big business in Connemara.

People have been making poteen in the Connemara hills for generations.  It is an illegal industry, but as the Gardaí have been unable to halt production, it is also an industry that is very much alive, and lucrative.  One bottle can cost £3.50, but the production price can be as little as 30 pence.It’s because the profits are so big that Comharchumann Cois Fharraige wants to turn poteen making into a multi-million pound industry.

Leaked to the press

The Connemara Gaeltacht cooperative’s spokesman Michael Lally explained to RTÉ reporter Jim Fahy that if poteen were to be made legally, it would be a sizeable economic asset to the country.  News of Comharchumann Cois Fharraige’s discussion paper on this subject had been leaked to the press, prior to its publication.  On the basis of rumour alone, four separate companies had contacted them to express their interest. People within the trade realise the potential of the suggestion that we are putting forward, and by no means is this a far-fetched story.

According to Comharcumann Cois Fharraige, legal poteen making has the potential to provide employment for up to a thousand people on a national basis, and would be able to contribute 40 to 60 million pounds to the Irish economy within ten years.