John P. Callanan, when he was aged thirty eight years, sailed on the Cedric from Queenstown and arrived in New York on 23rd February 1906.  He was described on the ship’s manifesto as a clergyman whose last residence was in Killimore. He paid his own passage and had over $50 in his possession. He was never before in the United States and was going to St. Benedict Rectory, Morris Park, Long Island. According to Church records he was parish priest in Killimore between 1899 and 1922. He is reputed to have solved some issues relating to the division of land at that time in Killimore parish. His exalted character and high sense of justice are mentioned in a local newspaper The Connacht Tribuneof April 2nd 1910. He died in Denver, Colorado, on 25th April 1923, at a relatively young age and is buried in the United States. He is commemorated by a headstone in the grounds of St. Joseph’s Church, Killimor. 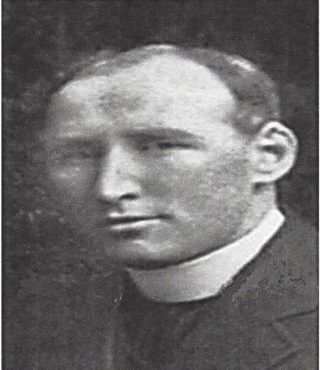 His Connection with The Rising

Fr. Martin Charles O’Farrell, well known for his nationalist views and strong preaching, was born at Ballymanagh House, Craughwell, in December 1879. He was ordained in Maynooth in 1906. He served as curate in Killimor 1912 – 1916.  His nationalist leanings and concern over land division became evident in Killimor when the Town Tenants’ League was formed to pursue the rights of the townspeople to ownership of land.  At a meeting of the Town Tenants League, held in the Town Hall, on 9th May 1912, the Connacht Tribune of 18th May 1912 states that Fr. O’Farrell informed the meeting “that Rusheeny grass farm was secured for Killimore town tenants, the grazing of which was arranged to the satisfaction of all parties”.

A series of articles, written by Martin Dolan following his interviews with the Galway Volunteers of 1916, was published in the Connacht Tribune in 1966. One article states that on the Wednesday of the Easter Rising, out of concern for the mobilised men of Easter 1916 in the Craughwell area, Fr. O’Farrell set out from Killimor in an effort to dissuade them from further participation in the Rising. In a witness statement, (Document NO. W.S. 1061, Bureau of Military History, 1913-1921). Laurence Flynn of Lisafooka, Loughrea, states that he was recruited into the Irish Volunteers during the week before the Rising. He gives the following account of Fr. O’Farrell’s journey to Moyode:

During Ester Week 1916 Fr. O’Farrell, C.C., Killimor, who was a great friend of mine, came to me at my home in Lisafooka. He said he wished to get to Moyode if possible as Loughrea was full of British forces – and that the Volunteers in Moyode would be surrounded. I cannot remember exactly what day of Easter Week that was but as far as I can recollect it was Wednesday. Father O’Farrell said he wanted to get some ruse to pass the British Military in Loughrea and asked me to accompany him. We both went on push bicycles to Loughrea and when we were halted by a sentry in Main St. Fr. O’Farrell told the sentry that he was going on a sick call with me. We were allowed to pass by the sentry and then Fr. O’Farrell told me to return home as he was going to stay the night at his own home which was in the direction of Moyode. I went to my own home by another route (the Bullaun road) and arrived safely.

The following Friday Fr. O’Farrell, accompanied on a motor-cycle by Fr. Tom Fahy, overtook the Volunteers at Limepark. Fr. O’Farrell, aware of destruction of Dublin and the position of the poorly armed Volunteers, waved his arms and cried out “Ye’re going to your deaths. Ye will all be killed”. Fr. O’Farrell subsequently served in the parishes of Eyrecourt, Ballinakill, Kilrickle and Leitrim.