The Soughley family were associated with Killimor for four hundred years according to
Fr. P. K. Egan in his book The Parish of Ballinasloe (1960). In the 1880s Frank Soughley married Margaret Conroy, from Moorefield in the parish of Quansboro/Fahy and raised a family of eight children.  Mick, born in 1890, was the eldest member of the family. He was a monitor in Killimor Boys’ National School and later went on to join the Dublin Metropolitan Police.  His official name was Michael Thomas Soughly. He was appointed to the DMP on November 20th 1911, having been recommended by James McDermott, J.P. Killimore. His warrant number was 11069. He was promoted to the office of sergeant on July 17th 1925, and became station sergeant on May 12th 1939. He gave a total of thirty six years and one hundred and sixty four days “Exemplary Service” to the DMP. Mick passed away on October 1st 1959. When he retired he was a sergeant in Kilmainham Garda Station. Mick witnessed some historical events during his lifetime. During the Easter Rising in 1916, the police were confined to their stations, but Mick being stationed close to Kilmainham Jail heard the shots of the firing squads during the Rising.  According to his family he was the officer chosen to inform Mrs. Clarke that her husband, Tom, (a signatory of the 1916 Proclamation) was to be executed. He also accompanied Grace Gifford from her home to Kilmainham Jail, for her marriage to Joseph Mary Plunkett (poet and also a signatory of the 1916 Proclamation)  just before her fiance’s execution. 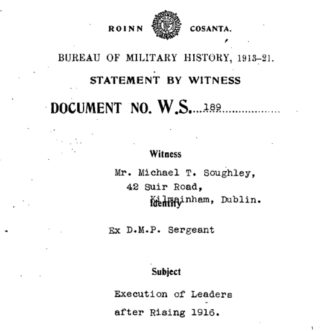