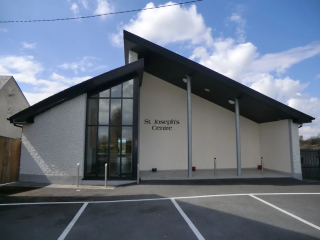 You now leave the church and see St. Joseph’s Centre. This amenity, or pastoral space, was officially blessed and opened by the Bishop of Clonfert, Dr. John Kirby, Fr. Ciaran Kitching, P.P. and Fr. Noel Lynch on Sunday, August 5th, 2007.

As we go in the main door we see a statue of St. Joseph the Worker, which was carved in oak by Vladimir Simik from Slovakia and donated by Seán Treacy and Family. The first door on the right leads into an office and the next door is the entrance to a Multi-Purpose & Meeting Room. On the large window in the latter room are tributes to Killimor Fás C.E. Team, Tony Dervan 1948-2005 and Tom Mullarkey 1938-2006. To the left of the corridor is a Counselling Room and the door directly ahead leads into the Meditation & Prayer Room. The window here was a gift from Joan Kinirons in memory of her uncle, Ambrose Larkin, Derrysiskal. Note the statue called “Respect”, a carving from bog oak by Kieran Tuohy, husband of Bernadette Moran, formerly of Derrysiskal, Killimor.