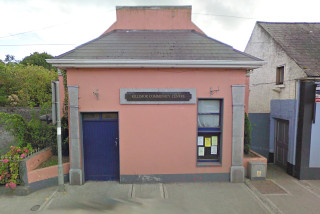 As we continue up the street, we see Killimor Community Centre on the left. It started out its life as an old garage, which was later adapted to make a small cinema. It was then bought, by a local committee and, by voluntary work, was rebuilt and extended, to make, what was at the time, according to opinion in Killimor, the nicest Dance Hall, in the county. In 1979/ 1980, the Hall, as it was then known, was extended to its present size. In 1983/ 1984, the Hall was vested in the parish and it was duly handed over. It has been refurbished in recent years though the main structure remains the same. It has been decorated and painted and new kitchens installed. It is now known as Killimor Community Centre and is maintained and run by Killimor Development Society.

A weigh-bridge was situated on the side-walk.

We now cross the street and to the right, opposite the Community Centre, we pass the area where Fitzpatrick’s Public House (now under new ownership) was located. A weigh-bridge was situated on the side-walk quite near Fitzpatrick’s and was used to weigh cattle, pigs and loads of hay and corn during fairs and markets. This premises will be long remembered as the public house where the first sliotar or hurling ball was made.