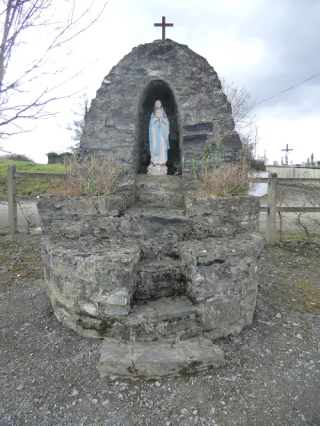 John O’Donovan, in his Ordnance Survey Letters 1838, noted the presence of the Holy Well in the Killimor/Boleybeg area. He stated that it was “still considered sacred, but the natives of Síl Anmchadha who are becoming less and less credulous every year, never perform turrises (or pilgrimages) at it, nor even take off their hats when passing by it, which argues a great falling off from the piety of their ancestors“. This is a very significant statement as it implies that the place was a site of local pilgrimage on St. Iomar’s feast day or Pattern Day which, according to tradition, was on November 22nd.

The Holy Well has disappeared and its supposed site is now marked by a modern Marian Grotto in the car park opposite the Old Cemetery.