Conclusion of the Walking Tour 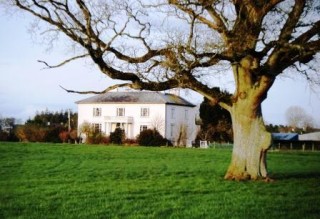 Hearnsbrook Demesne, at its zenith, contained many other important elements such as an entrance avenue lined with narrow cast iron railings, multiple trees and shrubs, orchards, out-offices, the steward’s house, coach house, gate lodge, the farm yard and back entrance gateway.

On the west side of Hearnsbrook House, where the land tapered downwards to the river, there once was an artificial lake. Within this lake were two islands, Flower Island and Sally Island. A narrow timber railed pedestrian bridge provided access to Flower Island. Another small footbridge crossed over the main avenue at a narrow point known by the present owners, the O’Toole family, as the ‘Dardanelles’. This bridge facilitated crossing over the avenue on a short pathway called ‘The Ladies Walk’. A ford in the river to the rear of the house was known as the ‘turf bridge’ and many people used this route to transport their turf across the demesne from the bog at Moneeneevena and other surrounding bogs. A mass path leading from Cloncona made its way up through the farm yard at the steward’s house and joined the main avenue leading out the gates and on towards Killimor church.

The name ‘Hearnsbrook’, which had many spelling variants, probably arose from the original (O’) Hearne family who resided here for many generations and who commissioned the construction of the house itself.

The front door is approached by long broad steps.

Hearnsbrook House, a visual symbol of wealth, was built circa 1820 and it is believed that its construction was commissioned by Edmund Hearne, who was the land owner at the time. Hearnsbrook House is a cut-stone building with a rendered lime façade. The front door is approached by long broad steps and has a surmounted semicircular fanlight. A document from 1863 described the house as a Mansion-house which contained four public rooms, seven family bedrooms and every other accommodation for a large establishment. Tripartite sash windows are to be found throughout the house and the glass used in the window panes was spun glass or crown glass.

Interior bell buttons were situated throughout the house.

Containing many small rooms, storage and living quarters, the basement of Hearnsbrook House covered a large area and would have been a hive of activity in times gone by and reminds us of the Upstairs/Downstairs situation prevalent at the time. The basement had many hallways, interconnecting rooms and a kitchen, cellar, cool room, pantry and laundry. A two storey section to the back of the house provided some of the servants’ accommodation and access points to the main house. Interior bell buttons were situated throughout the house and were connected to bells in the basement which rang to gain the attention of household staff. Other staff on this estate would have included a steward or land agent, a gate-keeper, a butler, a gardener, a coachman and labourers. Some of the land on this 2,000 acre estate was leased out to tenants who paid their rent in money or in kind.

The Hearne family became the land owners at Hearnsbrook during the mid 1600s and the family seat remained there until Eliza Louisa Dillon Hearne died in 1853 leaving Hearnsbrook House and estate to her husband George Dillon Hearne Kirkaldy.

Arrived to take up residence in Hearnsbrook.

George’s second wife became known as Mary Elizabeth Dillon Hearne Kirkaldy. For some length of time in the 1850s and 1860s there was a school on the estate whose patroness was Mrs. Kirkaldy. In 1863 Hearnsbrook was advertised as being available to rent . In September of that same year William C. Birmingham Trotter, Esquire, and family arrived to take up residence in Hearnsbrook and were there for two to three years. By 1894 Aeneas James George Mackay is listed as the private resident in Hearnsbrook. His sister, Lilian Mackay, married a Scottish lawyer called George Macphail. This marriage to Macphail saw the entire estate leave the long associated Hearne Dillon Kirkaldy family line.

Within the next few years arrangements were made to begin the division of the estate under the Land Commission Acts. The lands were purchased by local families and those who had worked the land as herdsmen, tenants and farmers. Hearnsbrook House and demesne were sold in 1928 to Austin J. O’Toole. The farm is currently owned and run by Noel O’Toole and his wife, Bernadette.

Our walking tour of Killimor is now completed. We hope you enjoyed the experience and that you have gained some knowledge of our rich heritage. Slán agus Beannacht.