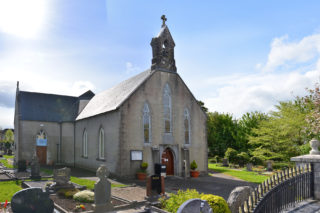 This roughly circular walk commences in front of the deconsecrated St Mary’s Roman Catholic Church. The site was acquiredcirca 1780, and the building was completed
c. 1803. The carved limestone bellcote was added around 1885. This church was deconsecrated in 1974 and it remained boarded up and abandoned until 1992. The
stained glass windows, by Mayer of Munich, and the main roof trusses required remedial work. The special architectural feature of the roof is that it is a self-supporting structure so there are no upright posts in the church. The roof was assembled on the ground and winched into place. The walls and external plaster were preserved while all other elements of the building were renewed and were completed in 2000.

Surrounded on three sides by one of the parish graveyards

The church is surrounded on three sides by one of the parish graveyards; this new graveyard was opened in 1935 and was later extended into part of the Ríasca, or marsh, the land having been donated by the Ussher family. Beneath one of the wings of the cruciform church is the crypt of the Athy family. To the south of the old church is an overgrown plot which was the former site of ‘The Band Hall’ which served as the meeting place of the Irish Volunteers who met and trained there in the years preceding the 1916 Easter Rising. Next to it was the home of the Coen family which was burned by the Black and Tans, on the night of the ‘Sack of Oranmore’, during the Irish War of Independence. ‘Tans raided the village and set fire to a number of premises, including the home of Commandant Joe Howley, across the road, which is now Keanes Bar. On the northern edge of the churchyard is the lane of many names which include Shell Lane, Tenants Lane, Barrel Lane and Church Lane. On the right-hand side of the lane once grew a line of Beech trees, while on the left was a row of small thatched houses.