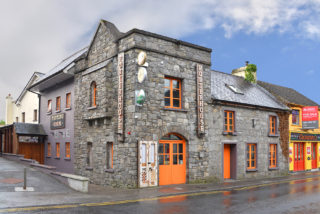 The Porterhouse was formerly owned by the local saddler, Packie Costelloe. A noteworthy feature of making saddles was placing the saddle in the river in order to harden the leather. Across the street is The Old Brewery pub, formerly owned by Christopher Kerins who had the contract to deliver Guinness products by horse and cart to areas as far away as Kinvara. Mr Kerins owned large holdings of property in Oranmore, including the impressive Oran Villa next door.