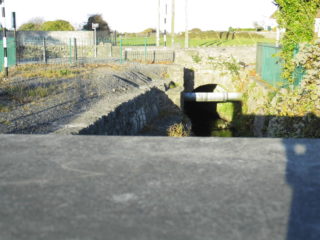 The bridge on Barrack Street crosses the canalised portion of the Oranbeg River, known as An Trinse Mór, the big trench. It was diverted by lord FitzGerald and Vesey to drive the water wheel in his brewery adjacent to his large house, Vesey lodge. As the local landlord he owned hundreds of acres in the surrounding townlands. no trace of either Vesey lodge, which was demolished in the 1960s, or the brewery, remain.