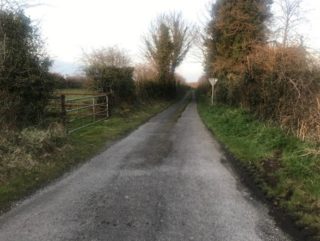 The townland of Cartron is located at the northern boundary of Kilbegnet civil parish, Barony of Ballymoe, County Roscommon. The townland borders the parish of Ballinakill.

The Down Survey Map (pre-Cromwell) states Cartron, under the name Clonresalgesse, was owned by Connor oge McFerde Hanly (Catholic). By 1670, ownership had changed to Patrick Everard (Catholic). There were 49 plantation acres of profitable land and 49 plantation acres of forfeited land. According to the survey, Cartron is in the Barony of Ballintubber West, County Roscommon.

O’Donovan’s Field Name Books notes 3 forts that can be found in Cartron. In the western part of the townland, there were two Danish forts and a gravel pit. A third fort could be found in the eastern portion of Cartron. A road travels south-south east through the town from Moat. The remainder of the townland consists of tillage and pasture.

According to Griffith’s Valuation, St. George Caulfield owned Cartron and leased it to the following: Reps. John Shiel, Bridget Hoare and Thomas Egan, as well as a joint lease to Michael Kelly, Patrick Timothy and Thomas Egan. Reps. John Shiel rented 96 acres, 0 roods and 3 perches of land for £60-0-0. Bridget Hoare £0-10-0 for a house and small garden on the same holding. Michael Kelly paid £3-5-0 for house, office and land, Patrick Timothy paid £5-10-0 for house and land and Thomas Egan paid £3-15-0 for land. The total measure of their joint holding was 15 acres, 2 roods and 20 perches. Thomas Egan also rented house, office and land for 22 acres, 1 rood and 10 perches, paying £14-0-0 per annum. The total annual valuation of rateable property was £87-0-0.

There were 2 houses in the Cartron in 1901, however, only 1 house was occupied. Martin Egan was the head of the household. He was from County Galway and was Roman Catholic. Denis Timothy of Rosmoylan owned the land on which the vacant house was situated. Both houses were listed as private dwellings. There 4 farm steadings in total. The census forms were collected on the 4th of April.

Martin Egan (55) was listed as a married farmer, although there is no record of his wife here. Martin could read and write. He did not record a language, suggesting he spoke English only. Michael lived in a 2nd class house with 3 front windows and 3 rooms. Permanent material was used to construct both the walls and the roof of the house. Martin owned the land on which his house was located along with 1 stable, 1 cow house, 1 piggery and 1 barn.

While there was a total of 2 households in Cartron in 1911, only 1 house was occupied. Martin Egan was the head of this household. Martin was a Roman Catholic, born in County Roscommon. Denis Timothy owned the land the vacant house was situated on. The houses were listed as private dwellings. There was a total of 3 farm steadings. The census forms were collected on April 3rd.

Martin Egan (60) was a widower and lived alone. Martin worked as a farmer. He could read and write. Martin listed no language, suggesting he spoke English only. Martin stated he was born in County Roscommon. Martin lived in a 2nd class house with 3 front windows and 3 rooms. While the walls of the house were made of permanent material, the material of the roof is not indicated. Martin owned the land on which his house was situated along with 1 stable, 1 cow house and 1 barn.