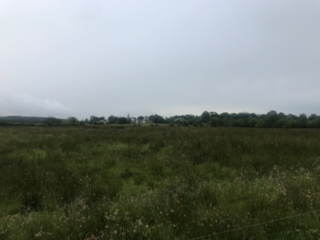 A Field in Millpark
Carmel O'Rourke

Páirc an Mhuilinn, field of the mill

Millpark is located in the civil parish of Kilbegnet, Barony of Ballymoe, County Galway. Millpark is situated approximately one-mile West of the village of Creggs.

The Down Survey Map provides no available information on the townland of Millpark.

O’Donovan’s Field Name Books states Millpark is located at the West end of Millford townland. Millpark is a small townland and has no feature of note. The land is made up of tillage and pasture.

According to Griffith’s Valuation Allen Pollock was the immediate lessor of the land. He kept 14 acres, 2 roods and 5 perches of herd’s house, office and land in fee worth £6-0-0. The total annual valuation of rateable property was £6-0-0.

Despite research the 1901 and 1911 Census records for Millpark have not been found as of the 10th of July 2020. Research is ongoing.