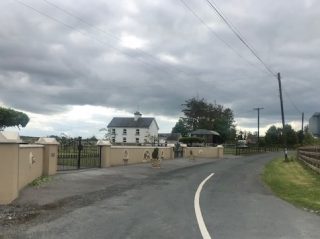 Fairfield is situated in the civil parish of Kilbegnet, Barony of Ballymoe, County Galway. Fairfield can be found 1¼ mile to the West of Creggs village.

The Down Survey Map states that the 1670 (Post Cromwell) owners of Fairfield, under the name Gravagh, were John Bourke (Catholic) and Sir Maurice Hurley (Protestant).

O’Donovan’s Field Name Books describes the landscape of Fairfield. In the North of Fairfield, there is a Danish Fort as well as Fairfield House. There are two portions of bog, one at the Northern boundary and a second portion of bog in the South West. Planting can be found in the Eastern portion and along the East boundary. The remaining land consists of tillage and pasture.

There were 3 houses in Fairfield in 1901, all of which were occupied. There was a population of 17 people, 11 were male and 6 were female. The heads of the households were Hugh Jones, Patrick Silver and Mary Kelly. All residents were from County Galway, except John Donoghue who was born in County Roscommon. All residents were Roman Catholic. Each house was listed as a private dwelling. There were 26 farm steadings, comprising of 2 stables, 1 coach house, 1 cow house, 6 calf houses, 1 dairy, 1 piggery, 2 fowl houses, 3 boiling houses, 1 barn, 1 turf house, 1 workshop, 4 sheds, 1 store and 1 forge. The census forms were collected on the 17th of April.

Hugh Jones (60) lived with his wife Anne (45) and their 4 children, Michael J. (14), Christopher T. (12), Edward P. (6) and Mary D. (17). Also in the house were 3 servants; Patrick Hegarty was a herd, John Donoghue (40) was a ploughman and Anne Clarke (21) was a general domestic servant. Hugh was a farmer, and each of children were scholars. John Donoghue was born in County Roscommon, while everyone else was born in County Galway. Edward P. and Anne Clarke could read only, while the rest of the household could read and write. Hugh and Anne spoke both Irish and English, while the others spoke English only. The family lived in a 1st class house with 11 front windows and 13 rooms. Permanent material was used to construct the walls and the roof of the house. Hugh owned the land on which his house was situated along with 2 stables, 1 coach house, 1 cow house, 6 calf houses, 1 dairy, 1 piggery, 1 fowl house, 3 boiling houses, 1 barn, 1 turf house, 1 workshop, 4 sheds, 1 store and 1 forge.

Patrick Silver (42) lived with his wife Ellen (31), their 4 children, Mary Anne (12), John J. (10), James Patk (9) and Frank (6) and a general domestic servant Pat W. Wills (20). Patrick worked as a game keeper, Mary Anne’s occupation was listed as daughter. The 3 sons were listed as scholars. All members of the family could read and write. Each person in the household spoke English only. The Silver family lived in a 2nd class house with 5 front windows and 4 rooms. Both the walls and the roof of the house were made of permanent material. There was also 1 fowl house. Hugh Jones owned the land on which the house was situated.

Mary Kelly (70) was a widow who lived alone. Mary worked as a collier. While she could not read, she spoke both Irish and English. Mary lived in a 4th class house with just 1 front window and 1 room. Perishable material was used for both the walls and roof of the house. Hugh Jones owned the land on which the house was situated.

There was only 1 house in Fairfield in 1911. The population was 4 people, 3 of whom were male and 1 was female. Michael J. Jones was the head of the household. Each person was from County Galway and each were Roman Catholic. The house was listed as a private dwelling. There were 19 farm steadings. The census forms were collected on the 11th of April.

Michael J. Jones (24) was an unmarried farmer. He lived with his sister Annie (26) and 2 servants Martin Hegarty (32) and Thomas Blygh (19). Martin’s occupation was listed as a labourer, while Thomas was recorded only as servant. All members of the household could read and write. No language was listed for any person, suggesting they spoke English only. The Jones’ family lived in a 1st class house with 13 front windows and 10 rooms. Permanent material was used to construct the walls and the roof of the house. Michael owned the land on which the house was situated as well as 2 stables, 1 coach house,1 harness house, 2 cow houses, 1 calf house, 1 dairy, 1 piggery, 1 fowl house, 1 boiling house, 1 barn, 1 turf house, 1 potato house, 1 workshop, 1 shed, 1 store, 1 forge and 1 laundry.