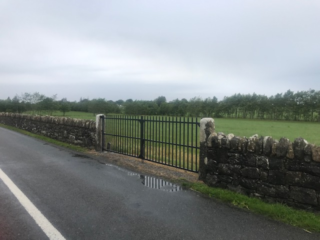 Millford is situated in the civil parish of Kilbegnet, Barony of Ballymoe, County Galway. Located one-mile East is Creggs Village in the townland of Creggs.

O’Donovan’s Field Name Books suggests there is no remarkable feature in Millford. Millford is a small townland consisting of tillage and pasture.

According to Griffith’s Valuation, Allen Pollock was the immediate lessor of the land. Martin Morrissy paid a total of £1-5-0 for land measuring 3 acres, 0 roods and 6 perches and house and land measuring 2 acres, 1 rood and 8 perches.

There were 2 households in Millford in 1901, both of which were occupied. The heads of the household were as follows: Catherine Coyne and Sarah Satchwell. The total population was 5 people, 2 were male and 3 were female. All residents were born in County Galway, except Ellen Kelly who born in County Roscommon. All were Roman Catholic, except Sarah and Allen Satchwell in House 2, who listed their religion as Irish Church.

Both houses were listed as private dwellings. There were 16 farm steadings, all belonging to House 2. The date the census forms were collected was not recorded.

Catherine Coyne (70) was a widowed cottier. She lived with her unmarried son Pat (30). Pat worked as an agricultural labourer. While Catherine could read only, Pat could read and write. Catherine spoke Irish and English and there was no language listed for Pat suggesting he spoke English only. Catherine and her son were born in County Galway. The family lived in a 3rd class house with 3 front windows and 3 rooms. Perishable material was used for the construction of the walls and the roof of the house. Sarah Satchwell was the landholder.

Sarah Satchwell (56) was a widowed farmer. She lived with her unmarried son Allen (36) and general domestic servant Ellen Kelly (30). Allen was listed as a farmer’s son. All members of the household could read and write. No language was listed, suggesting they spoke English only. While both Sarah and her son were born in County Galway, Ellen was born in County Roscommon. Ellen was a Roman Catholic. Sarah and Allen listed their religion as Irish Church. The family lived in a 1st class house with 12 front windows and 17 rooms. Permanent material was used to build the walls and the roof of the house. Sarah owned the land on which her house was situated along with 1 stable, 1 harness house, 1 cow house, 1 dairy, 1 piggery, 2 fowl houses, 1 boiling house, 1 barn, 1 turf house, 1 potato house, 1 workshop, 2 sheds, 1 store and 1 forge.

There was just 1 house in Millford in 1911. It was headed by Allen Satchwell and occupied by his family. There was a population of just 2 people, 1 male and 1 female. They were both born in County Galway and were members of the Church of Ireland. The house was listed as a private dwelling. There were 16 farm steadings. The census forms were collected on the 15th of April.

Allen Satchwell (45) was an unmarried farmer who lived with his widowed mother Sarah (65). Both Allen and Sarah could read and write. No language was listed for either member of the family, suggesting they spoke English only. Allen and his mother were both born in County Galway. The family listed their religion as Episcoplian. The Satchwell family occupied a 1st class house with 15 front windows and 8 rooms. The walls and the roof of the house were both constructed using permanent material. Allen owned the land on which his house was situated along with 2 stable, 1 coach house, 1 harness house, 2 cow houses, 1 calf house, 1 dairy, 1 piggery, 1 fowl house, 1 boiling room, 1 barn, 1 turf house, 1 shed, 1 store and 1 laundry.