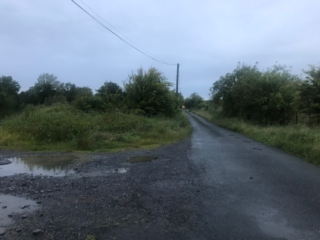 Lenarevagh is located in the civil parish of Kilbegnet, Barony of Ballymoe, County Galway.

The Down Survey Map as of the 5th May 2020 provides no information on the townland of Lenarevagh.

O’Donovan’s Field Name Books states there is no remarkable feature within the townland of Lenarevagh. The land consists of tillage and pasture.

Despite research no census records for 1901 can currently be found.

There was only 1 household in Lenarevagh in 1911. The population was 7 people, 4 were male and 3 were female. Michael Reynolds was the head of this household. All were born in County Galway and all were Roman Catholic. The house was listed as a private dwelling and had 2 farm steadings. The census forms were collected on the 6th of April.

Michael Reynolds (32) lived with his wife Elizabeth (37), their 2 daughters, Elizabeth (4) and Annie (3), their 2 sons, Thomas (2) and John (1) and servant James (45) whose surname is unreadable. Michael and Elizabeth had been married for 5 years and had 4 children. Michael’s occupation was listed as a herd and James worked as a labourer. Each of the children were listed as infants. Michael, Elizabeth (37) and James could read and write. All members of the household spoke English only. The family lived in a 2nd class house with 4 front windows and 3 rooms. permanent material was used for the construction of the walls and the roof of the house. There was 1 cow house and 1 piggery. Allen Satchwell was the landholder.