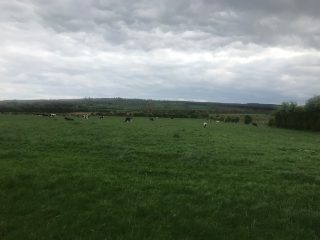 O’Donovan’s Field Name Books indicates a portion of bog and wood can be found in the South of Gorteenfadda, while the remaining land is tillage and pasture.

According to Griffith’s Valuation, Allen Pollock was the immediate lessor of the land. Patrick Conneran rented house, office and land measuring 22 acres, 0 roods and 33 perches and another holding of house and land measuring 17 acres, 2 roods and 12 perches. Patrick paid £17-10-0 in total. William Carroll and Thomas Carroll jointly rented 14 acres, 1 rood and 20 perches on the same holding. William paid £3-10-0 for house, office and land and Thomas paid £3-5-0 for house and land.

There was only 1 household in Gorteenfadda in 1901, occupied by Luke Tiernan. The house was listed as a private dwelling and there were no farm buildings. The census forms were collected on the 10th of April.

Luke Tiernan (61) was a widower who lived alone. Luke’s occupation was listed as Army pensioner- service connery to range [sic]. Luke was born in County Galway and was a Roman Catholic. Luke could not read, and no language was recorded, suggesting he spoke English only. He lived in a 4th class house with no front windows and just 1 room. The walls of the house were made of permanent material, while the roof was made of perishable material. Hubert Satchwell was the landholder.

Despite research, no Census Records for the year 1911 could be found for Gorteenfadda as of the 15th of May 2020.