You are here: Home>Places>Tuam Heritage and Nature Trail>06. Bridge House, 1819 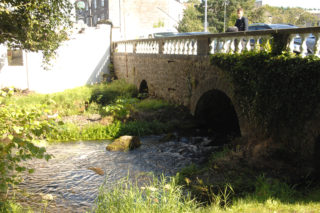 In 1837 Charles Blake built his Brewery which opened in 1740, producing five thousand barrels of malt liquor and six hundred quarters of malt. It closed down for business in 1892. The balustrade on Shop Street Bridge originally intended for Menlo Castle was installed, when his wife didn’t like it. The Mill Pool was redesigned as a two-stage channel 2007[1]. The Millar’s Cottage with its Victorian facade was rebuilt in 2016.