You are here: Home>Places>Tuam Heritage and Nature Trail>19. Mercy Convent 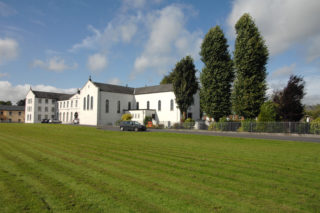 At the request of Doctor McHale, the Sisters of Mercy opened a Convent in Tuam in 1846. The first sisters to arrive on 2 January were Mother Mary Alphonsus Ryan (first Superioress of the Tuam Foundation), Sister Mary Clare Maher, and Sister Mary Magdalen Maher who was then a postulant. They came from the Carlow House of the Order and they were accompanied by Mother Ceilia Maher, Superioress at Carlow, and by Sister Mary Josephine Cullen and Sister Mary Angela Johnson who remained for a time to assist in the establishment of the Convent.

Mercy Convent, Tuam; the photograph is part of the Eason collection at Galway library.

A House of Mercy was immediately opened as a step towards the alleviation of the distress then prevailing in the town and district. Girls of impoverished families were cared for in this Institution and were employed at laundry-work and needle-work.

A Boarding School for young ladies was also opened at about the same time but the nuns could not afford to devote much time towards its development until the Famine had ceased. During this awful period, the Sisters worked unceasingly to help the starving populace and they are said to have played a heroic part in the nursing of the afflicted during the cholera epidemic of 1847.

The Famine conditions continued until 1851 and from then onwards, the Order concentrated on developing the schools. The present House of Mercy was erected in 1861 and in 1866 a weaving room was added.[1]