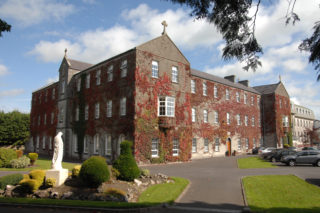 The history of St. Jarlath’s College is outlined on the school’s website as follows:

St. Jarlath’s College was founded in 1800 by Oliver Kelly, under the patronage of the then Archbishop of Tuam, Edward Dillon. It was primarily as a preparatory school for Maynooth seminary. Located in the Mall and two adjacent buildings, little is known about this early school beyond it fulfilling a large gap in the educational requirements of members of the Catholic Church in both the Arch-Diocese of Tuam and in Connaught as a whole. After several years of activity, the 37 year old Rev Kelly was promoted to the office of Archbishop, and proceeded to look after the College he had founded. In 1816, the Archbishop moved to accommodate the vacant premises of the recently bankrupt Ffrench’s bank. In the following years, Jarlath’s grew in both size and reputation, even functioning as a seminary in its own right, largely independent of Maynooth. The new location also brought boarding to the College for the first time, previously having to rely on people in the town to house students. The College eventually purchased the Ffrench’s building in 1827, around the same time that construction began on Tuam Cathedral on the College grounds.[1]

Dr Kelly died in 1834 and Dr. John McHale appointed as his successor. This was a contentious selection and as the school history states, had a profound effect on the College:

Dr. MacHale would leave a big stamp on the College over his forty seven year stint as Archbishop of Tuam, his keen interest in Irish history and language fostering the beginnings of a long tradition of patriotism and Irish nationalism in the College and surrounding diocese. The famine struck a blow to the College just as it did the rest of the country, with student numbers dwindling to as low as 16 during the worst years. The College survived through, and indeed several professors in Jarlath’s worked hard to alleviate the worst effects on the famine-stricken Tuam.[2]

Various improvements and additions were made to buildings in the College and in 1858 a new building became the focus of school life, including student accommodations and housing for professors. The College history states:

Further expansions (such as the building of a study hall and the implementation of electricity) were undertaken in the next few decades until 1927 when a major expansion of the oratory and the building of a gym and pool were undertaken. A new wing was then built in 1950 to commemorate the College’s 150thanniversary. Following the implementation of free education and the availability of bus routes in the early 1970s, there was a big spike in day boy numbers enrolled in the College.  This marked a huge shift in the dynamic of St. Jarlath’s, which had always been primarily a boarding school. However, despite the inherent difficulties involved with adapting to this change, the school coped with and soon had overcome most of the problems presented by such a huge change. It was announced early in the new century that due to a decrease in the number of students interested, boarding would cease in the College, which it did in September 2006. This was a massive change for the school, for the first time being run exclusively for day boys.[3]

On the sporting fields St. Jarlath’s is well known for its prowess in Gaelic games. To date they have recorded 12 Hogan Cup titles and have at times offered their pitch facilities to the County Team for training purposes. One All Ireland Senior winner, Jarlath Fallon attended the College, one of eight to do so.

St Jarlath’s College made the decision to amalgamate with St. Patrick’s College CBS in 2000. This heralded a new school uniform and a renewed school spirit.